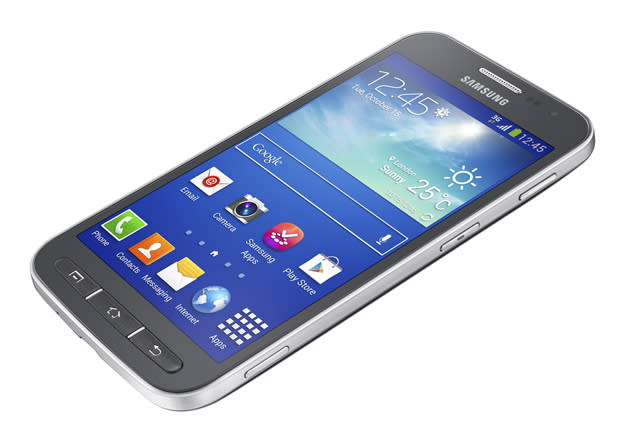 The rugged Galaxy S 4 Active had them, and so did the lesser-known Xcover2. But all-physical navigation buttons are becoming rarer on Samsung phones nowadays, and that's why our eyes were drawn to the manufacturer's latest low-end offering, the Galaxy Core Advance. In addition to the obvious trio on the front, the handset also finds room for dedicated camera and voice recorder buttons on the side. Specs-wise, however, we're still in deeply unexciting Galaxy Core territory, with Android 4.2 and TouchWiz running on a 480 x 800 display (now slightly bigger at 4.7 inches), a 1.2GHz dual-core processor, 1GB of RAM, 8GB of onboard storage (expandable via MicroSD) and Europe-friendly 3G data bands. The phone will be out early next year, although we're not sure exactly where it'll be sold or for how much. What we can say, though, is that Samsung will have to drastically undercut the superior Moto G (which has a 720p display and Android 4.3) if it plans to go up against Motorola in the same markets.

In this article: android, budget, galaxy, galaxycoreadvance, low-end, mobilepostcross, samsung, touchwiz
All products recommended by Engadget are selected by our editorial team, independent of our parent company. Some of our stories include affiliate links. If you buy something through one of these links, we may earn an affiliate commission.