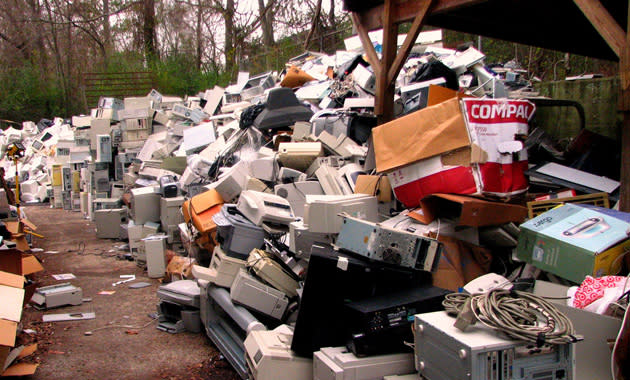 We've known for years about the growing volume of electronic waste, but a new UN study suggests that the situation is only getting worse -- and that the US is largely to blame. The organization says that Americans created the most e-waste in 2012, at 9.4 million metric tons. The country produced no more than 2.2 million tons in 2005. China was the runner-up at 7.2 million tons, but it also has a much larger population; researches estimate that the US generated nearly 30 tons of waste per person versus just 5.4 in China.

As to why Americans have so much tech junk? Most likely, it stems from an obsession with cellphones. A simultaneous study from MIT and the US National Center for Electronics Recycling shows that handsets represented 120 million of the 258.2 million used electronic devices in the US during 2010, and that ratio likely isn't getting any smaller. Whatever the cause, developing countries have to bear the brunt of our e-waste; MIT notes that most used gadgets leaving the US are going to China and Latin America. And that's only counting trackable shipments -- both the UN and MIT believe that there are many gaps in their data, which hints that the problem is considerably worse.

In this article: cellphone, e-waste, mit, ncer, un, unitednations, unitednationsuniversity, usnationalcenterforelectronicsrecycling, waste
All products recommended by Engadget are selected by our editorial team, independent of our parent company. Some of our stories include affiliate links. If you buy something through one of these links, we may earn an affiliate commission.