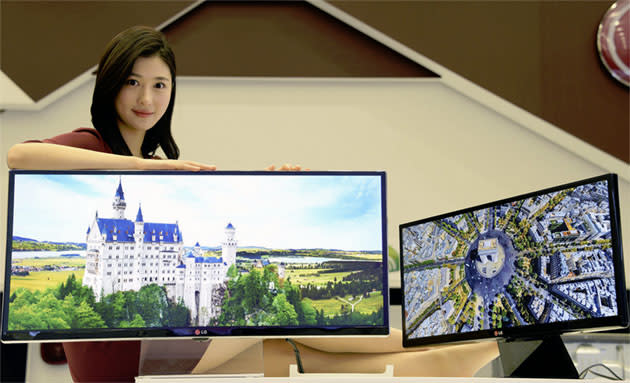 LG's monitor division has been zigging lately while it's competitors zagged, skipping regular widescreen in favor 21:9 ultra-widescreen models. It's now made another interesting choice for its first 4K monitor, the 31-inch 31MU95. It'll feature a so-called DCI or Real 4K (4,096 x 2,160) IPS panel with a 19:10 ratio -- similar to a screen it demo'd at CES last year. For comparison's sake, most Ultra HDTVs and monitors like ASUS's first 4K model display 3,840 x 2,160 pixels at 16:9. Interestingly, the new offering conforms to the 4K format recorded by RED's Epic and Scarlet cameras and also packs a Thunderbolt 2 port with 20Gbps throughput. LG claims that'll let you monitor 4K footage and archive it up at the same time -- ideal for on-set movie playback or post-production, for instance.

LG will also offer 34-inch and 29-inch UM95 models with 3,440 x 1,440 resolution at 21:9, which will display 99-percent of the sRGB gamut and come with LG's True Color calibration software. There's no pricing on any of the new monitors yet, but Dell's recently launched 32-inch 4K Ultrasharp model is running $3,299, by way of reference. The high-res panels and other ultra-widescreen business models from LG will arrive at CES 2014 in January -- naturally, we'll be there to fill in the wider picture.

In this article: 4k, ces, lg, monitor, UltraWidescreen
All products recommended by Engadget are selected by our editorial team, independent of our parent company. Some of our stories include affiliate links. If you buy something through one of these links, we may earn an affiliate commission.