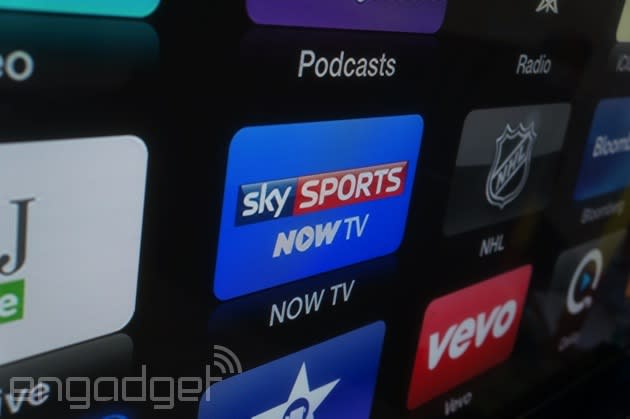 UK Apple TV owners can now access live sport following the launch of a Sky Sports app from Now TV. Already available on smartphones, tablets, consoles and its own set-top box, Now TV's Sky Sports Day Pass lets owners of Apple's set-top box access 24 hours of coverage from Sky's six sports channels for £9.99. Although Netflix and Apple's own iTunes Movies channels are live on Apple TV, Sky has not yet brought its own film and entertainment offerings to the platform. We've contacted Sky for comment on its future plans and will update you in due course.

In this article: app, apple, apple tv, hdpostcross, now tv, sky sports, streaming
All products recommended by Engadget are selected by our editorial team, independent of our parent company. Some of our stories include affiliate links. If you buy something through one of these links, we may earn an affiliate commission.