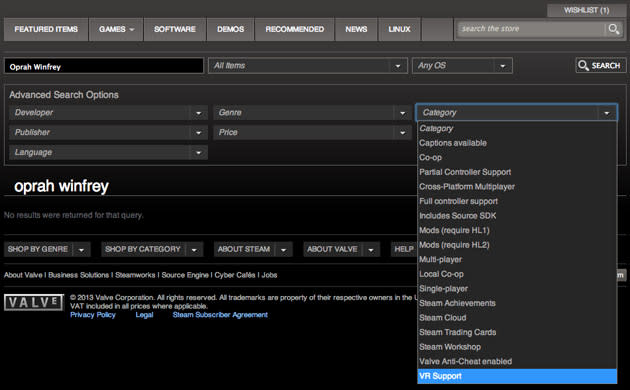 Assuredly tired of trawling news sites and forums to find games with virtual reality headset support, the fine folks of Valve recently added a search filter to the widely used Steam game store for games with VR headset support. Think of it like the grown-up version of Oculus Rift's own Share developer portal: the same principle, but for full games.

The filter is called "VR Support" (as seen above), though the Oculus Rift is the only VR headset we know anyone using. Of course, Valve is working on its own VR tech -- though it remains unclear if that's intended for anything beyond R&D -- and we suspect several other companies are as well (Sony, perhaps?). Nine games currently show up as supported, from Valve's first-party software to Surgeon Simulator 2013. With more games on the way, that list will assuredly grow as we move comfortably past the 2013 holiday release lull into 2014's very busy first quarter.

In this article: hdpostcross, oculusrift, steam, valve, virtualreality, vr
All products recommended by Engadget are selected by our editorial team, independent of our parent company. Some of our stories include affiliate links. If you buy something through one of these links, we may earn an affiliate commission.