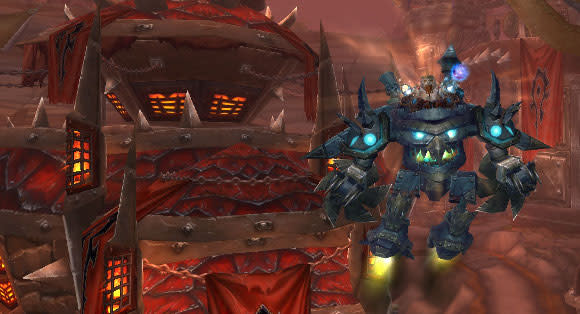 When it was first announced, the tier 16 set bonuses were something that I was initially pretty excited about. Both the tier 16 2-piece and 4-piece bonus seemed to be things that would fit well into our repertoire and gives us a little bit of a boost. Some healers weren't too convinced that these would ultimately be any good for us. It's a debate that happens pretty much every time we get a new tier of content and gear.

So, we've been in Siege of Orgrimmar for a bit now, and a fair number of healing shaman have either obtained their pieces of tier gear from the various raid difficulties, or are starting to now. So then the question of the quantum second is ultimately whether or not they are any good. I figured I would share my own observations on the matter.

Recently I managed to get my four piece bonus for tier 16, and with my guild working on Garrosh, I've been starting to look at exactly what these two pieces are doing for the raid group as a whole. The inspiration for this comes from looking into 2-healing Garrosh in my 10-man raid group. At times like this you start looking at what your spells are doing, and if you need to adjust your usage any. While combing through the logs over at Warcraft Logs, I saw exactly how much healing the 2-piece bonus was contributing to our tanks survival. Lets recap here quickly.

Item - Shaman T16 Restoration 2P Bonus
When Earth Shield heals a target, the target will gain 300% of the amount healed as an absorb.

When the set bonus was first announced, I was cautiously optimistic about it. I mean, part of resto shaman best practices is keeping Earth Shield up on your tank anyways, so any little extra bonus you receive couldn't possibly be a bad thing right? After that though, with switching servers and guilds and learning how to heal with a new healing team I didn't really have time to look at it until recently. I was pleasantly surprised with what I saw. In our longer attempts on Garrosh, Nature's Barrier which is the proc from our 2-piece set bonus, was counting for 7% of the total healing done. On our best attempts it was absorbing upwards of almost five million points of damage. In each attempt it was doing quite a bit of work on the tanks. That may not seem like much when compared to other healers who have shields that absorb damage normally, but for a restoration shaman that's a considerable boon. It was absorbing damage on par with Power Word: Shield and Divine Aegis from our Discipline Priest, and I'm not exactly going to scoff at that. Looking at logs like that led me to invest in a glyph change and adopting Glyph of Eternal Earth. Since there were plenty of times I was using Lightning Bolt and Glyph of Telluric Currents to regen mana, it just seemed like a good idea to get mana free charges on ES, and subsequently free absorb shields on the tank.

The set bonus is very powerful, but is balanced against the fact that in order to trigger the target has to be hit, take damage and get an ES heal in order to get the heal. Even with that in mind, it has done quite a bit more than I expected it to do, and our tanks genuinely enjoy that extra shield to keep them alive that's for sure. And every absorb it grants is healing that you, and your healing team, don't have to do. Over the course of a 5, 6 or 10 minute fight that can amount to quite a bit. I count this one in the definite win column as far as set bonuses god.

So, now let us turn our attention to our 4-piece. When we first caught wind of this one, well, it was a little bit of a weird one and hard to really place in the potential good or bad column. Lets recap quickly for the sake of reference.

So, the potential to get a clone of yourself that mirrors your direct healing spells with a cast time sounds pretty good right? Well, my main point of worry with it has been that it is linked to Spiritwalker's Grace. Shaman are traditionally turret healers, we like to stand and heal as much as possible. When we first got Spiritwalker's Grace it was such a good thing because we got to add some mobility to our healing, albeit on a cooldown. Anytime something get's tied to the ability I become quite suspect. I do not like when we are forced to choose between using our cooldown to move and heal or to increase throughput. Honestly it is a bit off putting when that happens. So is it worth it?

The ability summons a spectral version of yourself, Spiritwalker Champion. During that 15 seconds every direct targeted spells will also be cast by the champion. This means spells like Healing Wave, Lesser Healing Wave, Greater Healing Wave and Chain Heal. As a result, the ability benefits the most from using it on every cooldown and also maximizing your haste to get the most casts off in the 15 seconds that the champion is active. Does the champ really do much? Well, in a pinch it can certainly help out a damage spike, but don't expect it to be a substantial boost to your overall throughput. Even when using it on cooldown, it was still coming in well under 1% of the total healing done in most fights. I've found it handy in conjunction with spells like Ascendance and Spirit Link Totem for high damage phases like Empowered Whirling Corruption, but I'm still not entirely sold on it as a cooldown over using it for mobility healing. It will bear more testing before I can give it a final thumbs up or down and decide if it was worth the value of a four piece set bonus. What do you think? How have the set bonuses been treating you?

Totem Talk: Restoration lends you advice on healing groups, DK tanks and heroics and mana concerns in today's endgame -- or take a break and look back at the rise of the resto shaman. Happy healing, and may your mana be plentiful!
In this article: Celestial Harmony, featured, guide-to-shamans, resto, Resto-Shaman, restoration, restoration-shaman, restoration-shaman-column, restoration-shaman-totem-talk, shaman, shaman-guide, shaman-healing, shaman-info, shaman-restoration-column, shaman-talents, siege of orgrimmar, wow-shaman, wow-shaman-info
All products recommended by Engadget are selected by our editorial team, independent of our parent company. Some of our stories include affiliate links. If you buy something through one of these links, we may earn an affiliate commission.