Google's 'Inbox' email app is now available on the iPad

RockMelt social browser comes to the iPad, offers up news stories tailored to your interests 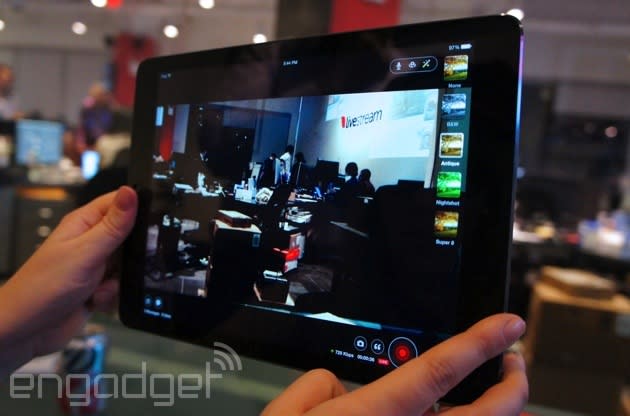 Yes, Apple's mobile platform lets you use iPhone apps on the iPad, but there's nothing like having one that's designed to take advantage of the excess real estate found on a tablet's display. With this in mind, Livestream today is releasing a new, universal version of its iOS application, complete with iPad optimization and a number of novel features in tow. Naturally, larger-screen compatibility is among the app's main highlights, while the rest focus on allowing users to easily launch broadcasts and watch real-time content. iOS devices can stream video in HD over 3G, 4G and WiFi -- and that includes being able to choose from a variety of live filters, share events on popular social networks (Twitter, Facebook, etc.), chat with viewers and, for those invested in the company's ecosystem, even use it as Livestream Broadcaster remote.

We had a chance to spend some time with the application and were pleased to see how well it performs, particularly during live streams, which is no surprise as that's its bread and butter. Creating an event and getting a broadcast on the air using an iPad mini took no more than 10 seconds, making it a pretty powerful tool for someone looking to record and share videos on the go -- Livestream points to citizen journalism as a perfect example of how the app could be well utilized. Max Haot, CEO of Livestream, told us that the development of the iPad-enhanced app is part of his team's goal to have a strong presence across the many existing platforms. "Our mission is to bring all kinds of events to audiences from all over the world." 9
In this article: iPad app, live streaming, Livestream, Livestream app, streaming
All products recommended by Engadget are selected by our editorial team, independent of our parent company. Some of our stories include affiliate links. If you buy something through one of these links, we may earn an affiliate commission.