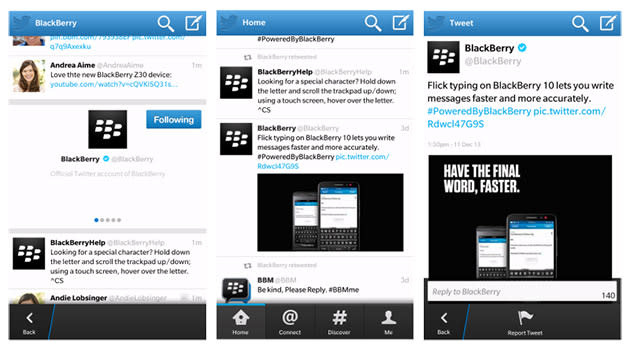 After loads of BB10 user complaints, BlackBerry is pulling the latest Twitter update from its app market. Should you still need your 140-character fix however, the beleaguered smartphone maker has a solution: roll back to the application's previous version -- 10.2.1 -- via the simple step-by-step instructions posted on its blog. First, delete Twitter from your device. Then, open BlackBerry World, refresh it and search for the micro-blogging service by name. Voila, a (hopefully) stable app should appear. If anything, this proves that the QWERTY king listens to more than just those in its boardroom. So, the next time that you notice an app go wonky, speak up -- it likely won't be in vain.

In this article: app, bb10, blackberry, mobile, mobilepostcross, rollback, twitter
All products recommended by Engadget are selected by our editorial team, independent of our parent company. Some of our stories include affiliate links. If you buy something through one of these links, we may earn an affiliate commission.