Polar Loop wristband tracks activity, exercise and sleep alongside an iPhone app for $109 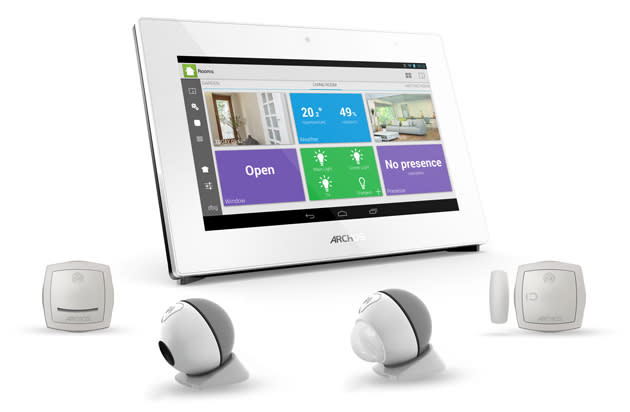 Archos looks to be getting in on the New Year's resolutions a bit early. The company clearly couldn't wait for CES to spill the beans on its 2014 lineup -- at least so far as connected devices are concerned. The device maker wants to make you a part of its internet of things, previewing a slew of devices, including an activity tracker, scale, blood pressure monitor, weather station and tablet. There is, predictably, not a whole heck of a lot of information on any of the products -- in fact, the company's managed to shove mentions of all of the above into a single press release issued a little more than a week out from the big Vegas event. Archos is collectively referring to the lineup as its "connected objects" -- devices that are monitorable in real-time via Android and iOS apps.

There's not much to say about the 7-inch Smart Home Tablet, at the moment. The company's positioning the Android device as a "gateway" to connected home actions, like turning on lights and recording video with a mini-cam when a motion sensor is triggered. CES will also see the debut of a new Weather Station from Archos, offering up indoor and outdoor temperature, humidity, CO2, pressure and other readings, along with national and historic levels for comparison. The company's Connected Self app, meanwhile, was built to work with a handful of new health devices. The list includes a connected scale that tracks body fat, an activity tracker that measures footsteps and burned calories and a blood pressure monitor that comes with an irregular heartbeat detector.

In this article: activity monitor, archos, blood pressure, ces2014, Smart Home Table, weather station
All products recommended by Engadget are selected by our editorial team, independent of our parent company. Some of our stories include affiliate links. If you buy something through one of these links, we may earn an affiliate commission.