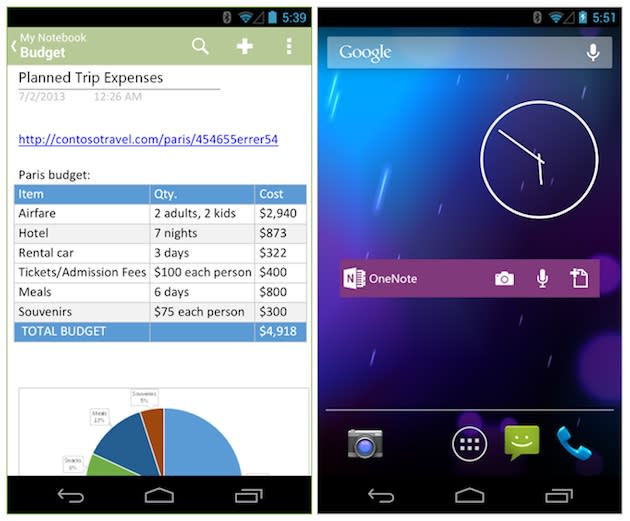 Since its major overhaul back in July, Microsoft's OneNote Android app has languished while the company built out the Windows version of its note-taking tool. That changed today after Microsoft pushed live a new update to the Play Store, which includes new sharing and widget features that Microsoft believes will help you get "more things done in less time." The updated app now integrates with Android's built-in sharing intents, allowing you to pull up a native sharing menu inside apps and immediately add new content to your OneNote account. Microsoft's also added a new OneNote widget, embedding options to let you view your most recent photos, recordings and notes, add new content and pin homescreen shortcuts to your favorite pages or notebooks. With its revamped UI, the Android app is almost at feature parity with OneNote for Windows 8.1, giving us a real reason to consider it over rival note-taking apps like Evernote.

In this article: android, app, evernote, microsoft, mobilepostcross, note, note-taking, onenote
All products recommended by Engadget are selected by our editorial team, independent of our parent company. Some of our stories include affiliate links. If you buy something through one of these links, we may earn an affiliate commission.