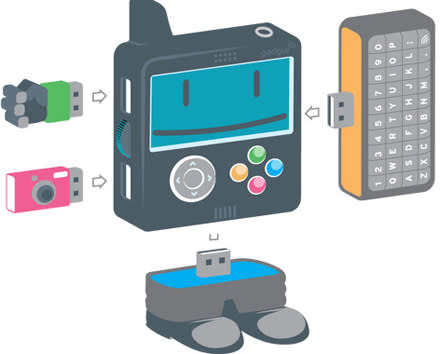 It's that special time of year between holiday sales and the pre-CES hype cycle that presents an opportunity to consider some of the most innovative devices of the year. Switched On is proud to present the 2013 Saluting Wares Improving Technology's Contribution to Humanity awards, also known as The Switchies.

This installment marks the eighth annual Switchies, which are decided based on a rigorous examination of the opinion of me, and do not reflect the opinion of Engadget or its editors. For that latter honor, nominees will need to win an Engadget Award. Now, then, let's stroll past the red carpet and tear open those envelopes.

The "Big Screen Scene" Award for Best New Video Device goes to the Google Chromecast. Taking an app-by-app approach, Google's cheap stream-redirecting HDMI dongle took everyone by pleasant surprise with its small size and ease of use. It also helped Google show the power of bridging the assets of Android and Chrome and built momentum in a frustrating race for the living room. It's now rapidly adding new content sources.

Honorable Mention for Best New Video Device goes to the Xbox One. Microsoft's latest home console is not only a powerful game system, but also a living room experience that incorporates many leading-edge technologies, including speech control, gesture control, video chat and an expanding array of over-the-top entertainment. Honorable Mention also goes to the TiVo Roamio Pro, the latest generation of the venerable CableCARD DVR that can support up to six tuners and offers improved streaming and offload to mobile devices.

The "Play's the Thing" Award for Best New Gaming Device goes to Sony's PlayStation 4. By casting off much of the corporate baggage of the PlayStation 3, like in-house chips, 3D and expensive novel optical formats, Sony finds itself in the enviable sweet spot of offering top-notch performance without occupying the top end of the market. Sony's simpler development proposition should also help enable a stronger flow of game titles coming into 2014.

The "Guess We Just Click" Award for Best New Input Peripheral goes to the Leap Motion controller. While we continue to see many companies focus on bringing down the cost of gesture control at the expense of a rich experience, Leap Motion presented a new 10-inch paradigm that won it a partnership with HP. Leap Motion wrests this award from Microsoft, which won it for the past three years.

The "Critical Bits" Award for Best New OS goes to OS X Mavericks. In a year where Apple, Microsoft and Google all unveiled new versions of their operating systems for tablets, Mavericks was left virtually unchallenged to pursue improvements for the desktop paradigm and Apple delivered with better battery life through superior memory management and its best multiple-monitor support yet.

In this article: apple, awards, google, microsoft, rossrubin, sony, switched on, SwitchedOn, switchies, the switchies, YIR
All products recommended by Engadget are selected by our editorial team, independent of our parent company. Some of our stories include affiliate links. If you buy something through one of these links, we may earn an affiliate commission.