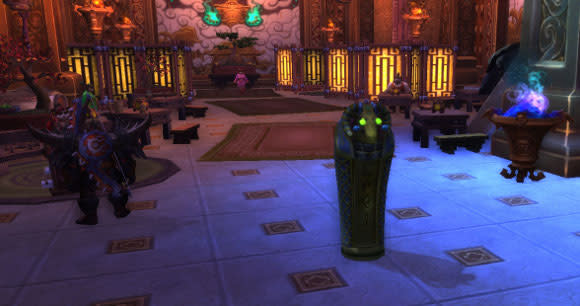 I like looking back and seeing how the past year has been for us, the dedicated water healers we are. I don't know about you, but at least for me I enjoy looking back over some of my favorite moments from the year prior.

2013 was certainly a bit of a roller coaster ride for restoration shaman, both in terms of how we performed and dealt with healing in a group and the changes we had to endure between tiers of content. It was filled with many good changes and things that made this a very good year for resto shaman.

The year started with the back end of the first tier of content for Mists of Pandaria. Specifically the Terrace of Endless Spring. The first tier of raiding content for Pandaria introduced for the first time, really, fights where no one healer really stood head and shoulders above the rest. Each fight has parts where healer specialties came in to play. Compared to previous raid content, I was quite excited by this. I have always wanted more fights in which every healer had a role to play. The sole exception to this was really Tsulong, where our Mastery: Deep-Healing truly shined. Resto shaman really just dominated From Mogu'shan Vaults to the Heart of Fear to the Terrace, we started out the year in a pretty good spot.

From there, in March, we moved on to the Throne of Thunder. Home of Lei Shen The Thunder King. Affectionately referred to as Trollduar by members of the community, this marked a highly anticipated and lore filled raid for us to enjoy. This was one of the first raids to really make restoration shaman use Spiritwalker's Grace on almost every fight. It might not sound like much, but that really made me quite happy. Tortos, Ji-Kun, Durumu and really every fight except for Primordius and Dark Animus there was a lot of healing on the move. This tier, though it definitely made use of all of our cooldowns on a regular basis, it was a tier in which moved a little bit away from the balance of it's predecessor. This was the tier I like to refer to as the shaman work house. We really had to hustle and work to do decent healing in this tier. It's not a bad thing, to have to work at healing, but it certainly required quite a bit more effort than I think we were really expecting. Again, not a bad tier of raiding for us, just a very busy one. It wasn't great or terrible for restoration shaman, it was just, well if I'm to be completely honest a little meh.

September of this year marked the last tier of raid content we are to receive in the current expansion. The Siege of Orgrimmar marks the pinnacle of all the previous raid tier events. Not only does it have suitably awesome lore behind it, but the fights themselves are fairly well balanced from a healing standpoint. From a restoration shaman view, each fight really gives us a chance to work with our entire kit. Just like the first tier of raiding, each fight has bits and pieces that are suited to each of the healing classes. Unlike ToT, Siege feels good, with the exception of those Sunreaver Constructs that seem to really enjoy soaking up our Chain Heals on the Galakras fight. Of all the raids we've had over the years, Siege is easily the best of them mechanics and balance wise for restoration shaman, and on fights like Garrosh, while it is a long fight it is far from boring. Our cooldowns do very well on the fight. Our abilities and even our set bonuses for this tier of gear all play well with the fight.

Overall, from a raid instance standpoint, it has been a surprisingly good year for us. Encounter balance, healing loads, stat values and set bonuses all seems to have hit a very good equilibrium. It is a trend I hope we will see continued in the coming new year.

2013 was certainly an interesting year for our spells and glyphs. The biggest change, and we've talked about it at length before, was the change to Healing Rain. The behavior of Healing Rain was changed in so much as it was made a smart heal, healing the 6 most injured targets standing in it. I wasn't quite sure about this change when it first happened, but it was ultimately a great thing. It fixed a problem we as restoration shaman experienced in the opening tiers of content. There was a time when multiple restoration shaman could potentially trip over each other with HR and cause a pretty large disparity in healing throughput. With the change to a smart heal, that doesn't happen any more, or at least not so much that it is noticeable. It was a pretty big shift from the passive constant healing that HR was for the longest time, and made it an even more useful tool in our kit. Sometimes, change can be a good thing.

Another thing that happened over the course of the previous year, well, we received quite a number of glyphs. These numbered among those that modified spells to be useful in combat, to ones that were just fun and cosmetic. Some of the highlights include Rain of Frogs, Elemental Familiars, Flaming Serpent, and one of my recent favorites, Eternal Earth. There is a nice assortment of glyphs to choose from between fights as well as just for the pure fun of them. It's a nice change of pace, to have so many useful glyphs and to have some fun ones worked in as well. We have legitimate choice in glyphs for the various encounters for really the first time in a long while. I remember being excited by the prospect of these additions, and I'm hopeful that in the coming year and the coming expansion that this trend of useful and fun glyphs will continue.

Overall, 2013 was a good year in the World of Warcraft for restoration shaman. While we had some ups and downs, and potentially a rocky start to the year, we are ending it with good, fun changes. I'm hoping 2014 feels as good for resto shaman as 2013 did. So now the question is, how was your 2013 as a restoration shaman? What were your favorite moments?