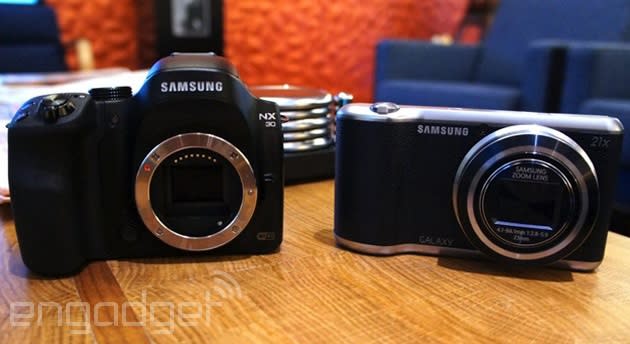 Samsung isn't waiting until CES starts to spill the beans on its camera lineup. The company has just revealed the Galaxy Camera 2 and NX30, both of which center around an NFC-based "Tag & Go" sharing feature; you can now tap your phone against either shooter to begin transferring photos. They also offer more control through upgraded Remote Viewfinder mobile apps that show the same settings you'd find on the cameras themselves.

The unique upgrades to each model vary widely. The Android-powered Galaxy Camera 2 still has the 16-megapixel sensor, 21x zoom lens and 4.8-inch LCD of its predecessor, but it touts much-needed improvements to battery capacity (up to 2,000mAh) and weight (down to 9.2 ounces). Samsung has also stuffed in a newer 1.6GHz quad-core processor with 2GB of RAM, and an update to Android 4.3 introduces both 120fps slow-motion video as well as separate autoexposure and autofocus controls.

The NX30, meanwhile, builds on the NX20's formula with upgrades to image quality and the display. The new mirrorless cam sports both a more light-sensitive 20.3-megapixel sensor and a fast hybrid autofocusing system that takes just 80ms to find its subject. Take a look at the back and you'll find a brighter, Super AMOLED-based touchscreen that can now tilt, not just swivel; on the side, there's a new 3.5mm microphone input. Glass aficionados may also appreciate two 16-50mm lenses launching alongside the NX30, including a quiet f2-2.8 lens and a video-friendly, f3.5-5.6 power zoom unit. Samsung isn't yet ready to divulge launch details for either the NX30 or the Galaxy Camera 2, but you can check out our hands-on galleries of all the new devices while you're waiting.

7
In this article: android, camera, ces2014, galaxycamera, galaxycamera2, hands-on, mirrorless, nfc, nx, nx30, pointandshoot, samsung
All products recommended by Engadget are selected by our editorial team, independent of our parent company. Some of our stories include affiliate links. If you buy something through one of these links, we may earn an affiliate commission.