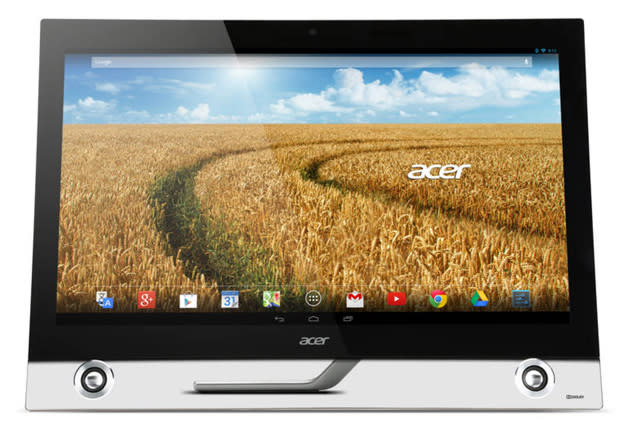 Perhaps the best way to regard Acer's growing range of Android "all-in-ones" is not as PC replacements, or even as giant tablets, but rather as touch-sensitive monitors that have the added benefit of being able to run their own OS. That certainly applies to the latest model, the TA272 HUL, whose 27-inch, 2,560 x 1,440, 10-point touch panel makes it particularly well equipped as a monitor for a Windows 8 PC. Alternatively, an "NVIDIA Tegra quad-core processor," which we suspect might be an old Tegra 3, will allow the unit to run basic tasks and media playback in Jelly Bean even when the source PC is switched off. The TA272 HUL comes with 16GB of onboard storage, a USB 3.0 port, HDMI and DisplayPort inputs and a 2-megapixel webcam, all for an RRP of $1,099. For reference, that's at least $100 more expensive than a similarly specced Acer monitor without Android (the T272 HUL), so you'd need to be pretty certain that you'll put that built-in OS to good use.

In this article: acer, all-in-one, Android, monitor, TA272HUL, Tegra, WQHD
All products recommended by Engadget are selected by our editorial team, independent of our parent company. Some of our stories include affiliate links. If you buy something through one of these links, we may earn an affiliate commission.