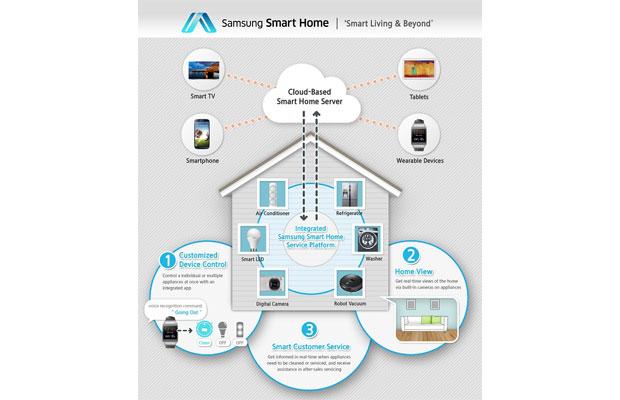 We heard whispers that Samsung was planning big for CES, and we're not just talking TV panels. It's now revealed Smart Home, which attempts to tie together Smart TVs, home appliances and handheld smart devices into one single platform. Perhaps more importantly, the company says it's going to collaborate with third-party partners to extend the platform to products and services beyond only those with Samsung branding.

At the middle of it all, there will be a single app that (as the picture above suggests) will get its hooks into all your wearables, phones and white goods with a cloud-based server keeping your data moving. Device Control will let users adjust lighting and temperature management through your smartphone. Meanwhile, Smart Home will also included embedded voice commands: if you say "going out" into your Galaxy Gear, then the system will automatically turn off your smart lighting and "selected appliances", so presumably not your fridge. The, once out, Home View will let you tap into devices with cameras inside your house, offering up some not-so-covert video streams to your Galaxy phone. Alongside the new system, the company announced a new software protocol too, hoping to forge a new ecosystem -- with Samsung in the middle of it all. Expect to hear more later this week.

In this article: ces, ces2014, hdpostcross, mobilepostcross, samsung, smarthome
All products recommended by Engadget are selected by our editorial team, independent of our parent company. Some of our stories include affiliate links. If you buy something through one of these links, we may earn an affiliate commission.