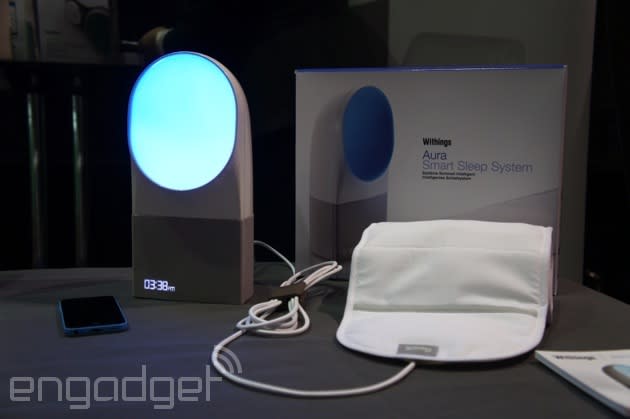 If you're anything like us, then getting out of bed on a cold, dark winter's morning is akin to raising the dead. Plenty of gadgets have promised to monitor our circadian rhythms and rouse us at the most biologically convenient time like the Zeo, but none have managed to totally win us over. That hasn't deterred Withings, which is launching the Aura, a two-part device designed to help us with our shut-eye. The $300 Aura combines a movement sensor that sits beneath your mattress and an LED lamp that promises to relax you at night and gently rouse you in the morning. The unit also promises custom light-and-sound patterns that'll help with power napping, getting over jet lag and chilling out with a good book. Naturally, all of this data will be fed into a mobile app, and we're looking forward to comparing this against our Philips Wake-up Light when it arrives in the spring. We've been able to spend some time with the device, and now we're able to shed some more light - pun intended - on the issue. The sleep sensor is designed to sit underneath your mattress and monitor your breathing, heart rate and motion in order to better understand the way you sleep. It's connected via USB rather than wirelessly, with the cable draping over the side of your bed and onto the lamp, which should sit atop your bedside cabinet. While you'd assume that the Aura was a singleton-only deal, there are three USB ports, two of which can be used for the sleep sensors, which enable couples to get the benefit. Assuming, of course, that their lifestyles are reasonably similar.

In our minds, we had assumed that the lamp was very much a Philips Wake Up Light clone, but unlike that hardware, this unit doesn't even attempt to simulate daylight to help you get out of bed. Instead, when sending you to sleep, it pumps out a glowing orange - akin to a low summer sunset - designed to promote your melatonin, and a neon-blue is used to banish that same chemical in the morning. Accompanied by a variety of pre-programmed sounds that are designed to aid the process, like nature sounds or classical music. In addition to replacing your bedside light and alarm clock, the lamp has designs on the rest of your normal bedside gadgets. The third USB port, for instance, is used to charge your smartphone, the mono speaker will double as a mono Bluetooth speaker, and if you're rich enough to own two, you can use A2DP to get stereo sound.

The top and sides of the lamp will recognize touch inputs, with a long press activating the reading light and a stroke along the side setting the alarm - but most controls will be kept for the bespoke mobile app. If you're already baked into the company's ecosystem, the data will also update into the Health Mate app, although there's no plans to unify the two just yet. While the retail unit, priced at $300, will only contain one bed sensor, units for your other half are available to buy from the company's website for $129 when the system launches in the Spring.

In this article: Aura, CES 2014, ces2014, hands-on, Sleep, video, Withings, Withings Aura
All products recommended by Engadget are selected by our editorial team, independent of our parent company. Some of our stories include affiliate links. If you buy something through one of these links, we may earn an affiliate commission.