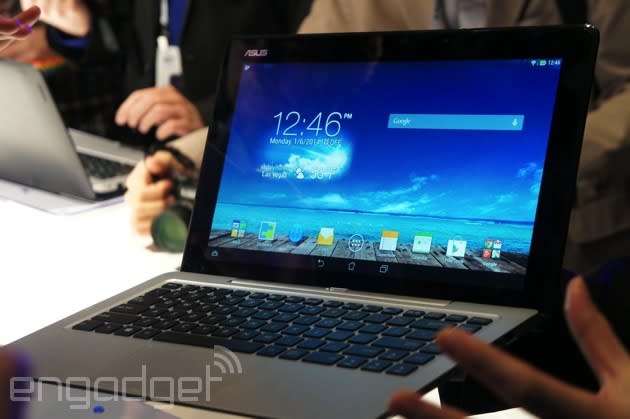 If you're looking for a dual-booting convertible but find ASUS' Transformer Book Trio a little too clever, you'll want to check out the company's just-unveiled Transformer Book Duet TD300. The 13.3-inch PC is really a dual-OS tablet that bundles a keyboard dock with its own hard drive and ports -- whether you're in laptop or tablet mode, you can switch between Android 4.1 4.2 or Windows 8.1 on the fly. The slate includes up to a 1080p display, a Core i7 processor and 128GB of solid-state storage; attach the dock and you'll get up to 1TB in disk space alongside USB, Ethernet and HDMI. ASUS plans to ship the Duet to Asia and Europe late in the first quarter of the year, and to the US by late in the second quarter. When it does ship stateside, the system will start at $599 for a Core i3 model with an "HD" (read: 1,366 x 768) screen, and $699 for a 1080p unit. In the meantime, follow past the break for some early hands-on impressions. We must say that switching between Android and Windows is really pretty easy: regardless of the OS you're using, you'll find a shortcut pinned to the bottom of the screen that allows you to switch. Just tap that, wait a second for a dialog box to flash across the screen and boom, you've crossed over onto the other side. So that's good news, then: what makes the Duet unique is something that it does well.

As for the hardware, well, this feels like a $599 machine, and that's actually us being generous. Granted, the build quality is solid, but the textured plastic back has a cheap, hollow feel to it. Also, at 1.9kg (4.2 pounds), it's rather heavy for a 13-inch laptop, even a touchscreen one, so if you're going to get this, you better be really excited about the dual-OS feature (and we're sure some of you are). On the plus side, the tablet itself feels relatively light, given its 13-inch screen size, and for that, we probably do have the plastic construction to thank. Also, keep in mind that that thicker design gets you up to 1TB of storage in the dock, up to 128GB of space in the tablet and nice-to-have ports like an Ethernet jack and full-sized HDMI socket. A fair trade, we'd say.

Some more good news: although the display doesn't have the best pixel density (1,366 x 768 resolution to start), it offers wide viewing angles -- just like most other ASUS laptops we've tested, come to think of it. All told, the screen stands up well to the harsh overhead lighting at ASUS's Las Vegas press event, which seems like a good early test (if we ever review this, we'll take it outdoors, too). Until we do give this the full review treatment, we'll of course reserve full judgment, especially on performance. For now, though, enjoy the hands-on pics!

Dana Wollman and Edgar Alvarez contributed to this report.

In this article: android, android4.1, asus, ces2014, convertible, hands-on, laptop, tablet, td300, transformerbookduet, video, windows, windows8.1
All products recommended by Engadget are selected by our editorial team, independent of our parent company. Some of our stories include affiliate links. If you buy something through one of these links, we may earn an affiliate commission.