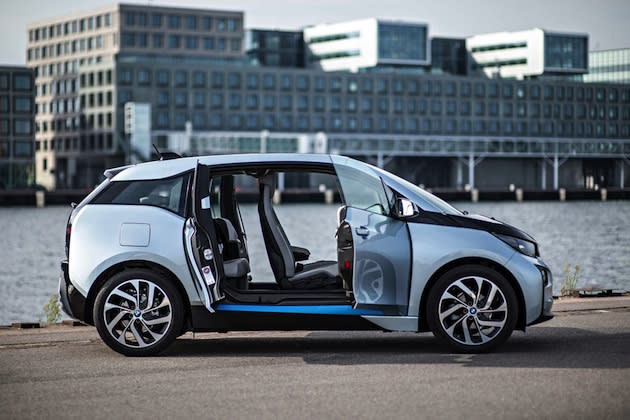 Automobile manufacturers, long laggard in the ways of technology, have been making a push in recent years to catch up with consumer expectations. BMW is one such car maker, and it's rolling out a suite of new technologies to improve its cars at CES 2014. First up is an improvement to its suite of driver-assistance technology -- ActiveAssist -- that's been built into a new prototype car. Generally speaking, it's a series of control systems that allow the car to react "to fluctuating grip levels" like during hydroplaning to react and bring the car back under control precisely, automatically and without driver input. It accomplishes this by both braking individual wheels (like existing systems) and adjusting steering input in response to its active monitoring of road conditions using lidar, radar, ultrasound and optical cameras.

BMW is also apparently on board with the recent smartwatch trend, as it's also built a version of its i Remote app -- that lets owners access vehicle information from their mobile device -- for Samsung's Galaxy Gear. The app delivers the BMW i3's remaining range, battery charge level and any departure times you've entered into the app, plus whether or not the doors, windows or sunroof are open. Not only that, Galaxy Gear owners can also send navigation destinations and access the climate controls in their i3, too.

Bavarian Motorworks is also rolling out improvements to its parking-assistance system. Using ultrasound sensors, your car will now find you appropriately sized spaces (as long as you aren't traveling faster than 22MPH) by evaluating the open spots on either side of the vehicle. It looks for those at least 55cm longer than the car and when you stop the car, press the parking button and hit the turn signal to let it know which side you want to park on, the system then maneuvers your car in for you. No muss, no fuss. Additionally, BMW has improved its Traffic Jam assistant as well. When traveling at 25MPH or slower, the system automagically maintains a set following distance and controls the steering to keep you steady in your lane when traffic gets heavy. The system uses the optical camera located behind the rearview mirror, and works in tandem with the cruise control and Stop & Go systems that provide driver assistance at speeds up to 87MPH.

Curious to know how all this new gear works in the real world? We'll be getting an i3 ride along here at CES, so stay tuned.

In this article: activeassist, autos, bmw, car, ces2014, galaxygear, i3, iremote, parkingassist, trafficjam, transportation
All products recommended by Engadget are selected by our editorial team, independent of our parent company. Some of our stories include affiliate links. If you buy something through one of these links, we may earn an affiliate commission.