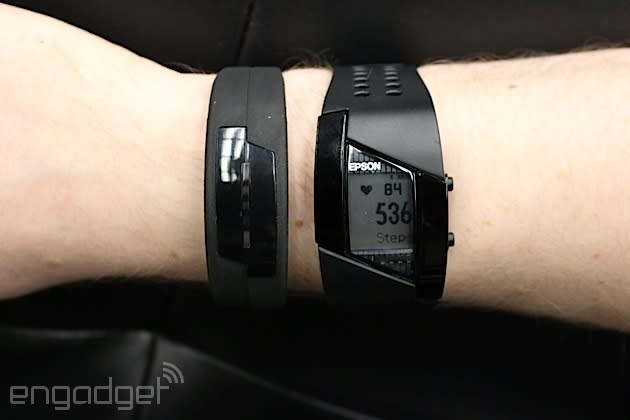 Epson, for better or worse, is best known for printers and projectors. However, it has been known to dabble in wearables, like its Moverio head-mounted displays, and even the occasional GPS watch. Now at CES 2014, the company is going up against the likes of Fitbit and Basis (and the rest) with a duo of fitness-focused watches. Called Pulsense, the wristbands are designed to monitor your heart rate, activity levels, calories burned and sleep patterns based on Epson's patented biosensors and internal accelerometer. The initial launch of Pulsense consists of two models: the Pulsense PS-100 and the PS-500. The PS-100 is just a simple LED bracelet, while the PS-500 has an LCD display that lets you read (at least a little bit of) fitness data on the go.

Among other things, the aforementioned bio sensors are able to measure your heartbeat by the amount of light reflected from red blood cells, and find out calories burned based on personal info like age and gender. There's also built-in memory, which means the watches can store about 480 hours of data before having to be offloaded to either an app or a PC. Additionally, each Pulsense wristband has a 3-in-1 proprietary chip that promises faster processing, a thinner profile and better battery life. Other features include heart rate-based "zone training" so those looking to shed extra pounds or get a bit more of an aerobic exercise can get additional guidance.

Both watches will ship starting during summer 2014. The PS-100 will be available for $129, while the PS-500 will cost $199. Those deciding to pick Epson's fitness wearables over the increasingly tough competition will apparently be able to pre-order one starting today. We've added a few impressions after the break. Between the two wearables, it's the screen-less PS-100 that seemed like a more sensible bet. The watch doesn't look premium enough. We know it's a $200 device, but the screen looks like pulse monitors of yesteryear, and the plastic casing puts it roughly on par with the original Pebble, which is $150 and, just as importantly, holding on to a bigger mindshare, important when there's just so many wearables. The LED band has a latch mechanism that ensures the band fits comfortably and securely, and you need it to fit snugly to ensure it's able to read your pulse. We'll be returning to Epson's stand later this week, because we weren't able to see how the companion apps worked -- expect an update soon.

Brad Molen and Mat Smith contributed to this report.

In this article: ces2014, Epson, fitness, PS-100, PS-500, Pulsense, Pulsense PS-100, Pulsense PS-500, wearable
All products recommended by Engadget are selected by our editorial team, independent of our parent company. Some of our stories include affiliate links. If you buy something through one of these links, we may earn an affiliate commission.