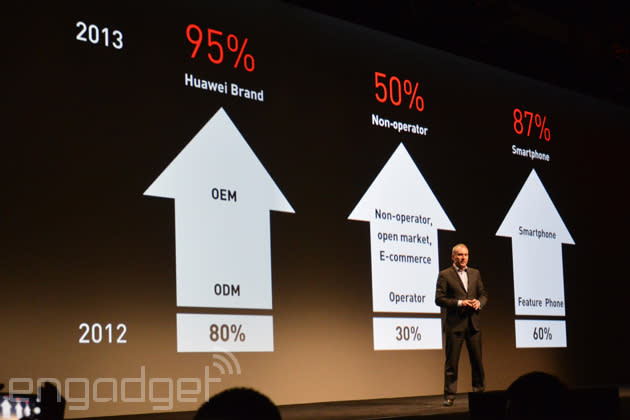 At Huawei's CES press conference, executive VP Colin Giles reminisced on 2013, when the company truly embarked on moving from an ODM to a consumer-facing OEM. By the end of the year, 95% of all handsets left its factories with the Huawei branding attached, and in Q4 2013, smartphone shipments topped 17.5 million. In the previous quarter, the Chinese phone-crafter jumped into the top three manufacturers worldwide, according to various analysts. Despite all the company's success and rapid growth, there's no intention to slow down -- Giles wrapped things up by setting Huawei's sales targets for 2014, and no less than 80 million devices will do.

7
In this article: ces, ces2014, colingiles, huawei, idc, mobilepostcross, phone, shipment, smartphone
All products recommended by Engadget are selected by our editorial team, independent of our parent company. Some of our stories include affiliate links. If you buy something through one of these links, we may earn an affiliate commission.