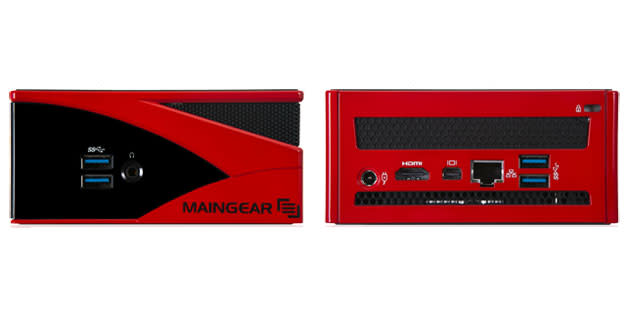 Traditionally, gaming PCs aren't built with size in mind, but Valve's Steam Machine initiative has changed the game -- now these rigs are taking up residence in the living room. In fact, that's exactly what Maingear's Spark was built for. This diminutive PC is built from notebook components: a 3.1GHz AMD A8-5575M processor with Radeon R9 M275X graphics, up to 16GB of DDR3L RAM and support for a 256GB SSD with a spare 2.5-inch HDD tray. All together, the Spark measures in at just over two inches tall and 4.5 inches wide in either direction. Tiny? You bet. Weighing less than a pound, Maingear says it's the smallest gaming PC they've ever offered. Despite its size, the company still had room to squeeze in four USB 3.0 ports, Ethernet and audio jacks and both HDMI and Mini DisplayPort output. Unfortunately, the Spark's final price point is up in the air, but the company promises it will be "an affordable PC solution." Spark is set to launch in the first quarter in Windows 7, Windows 8 and Steam OS configurations.

In this article: amd, maingear, maingear spark, spark, steam, steam machine, steam machines, steamos, vavle
All products recommended by Engadget are selected by our editorial team, independent of our parent company. Some of our stories include affiliate links. If you buy something through one of these links, we may earn an affiliate commission.