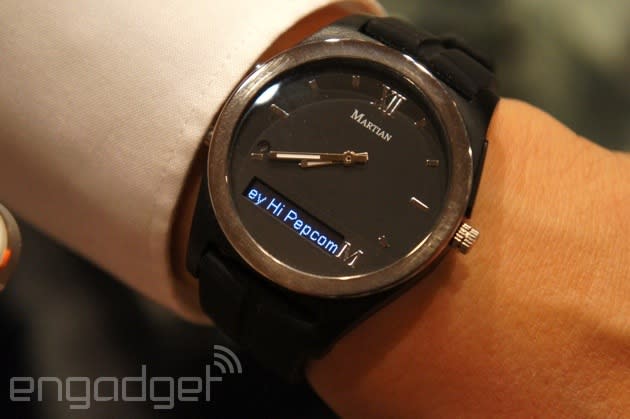 Martian Watches is back at CES this year, bringing with it a new semi-smartwatch in the company's traditional timepiece style. The Martian Notifier, as it's known, is a slight departure from previous efforts given it drops voice control -- the feature that's previously been the company's "hook" (although you can still remotely trigger Siri or Google Now with the press of a button). The watch keeps all other good stuff common to Martian's range, though, like the small OLED screen for displaying contact names or text messages, and the ability to engage a device's camera shutter remotely, among other things.

The Notifier pairs with iOS and Android devices via Bluetooth, and as the name suggests, it's focus is on alerting you to notifications. Rather than just vibrating every time something happens on your phone, though, you can select exactly what will trigger a buzz on your wrist. Furthermore, using the companion app, you can set up vibration patterns, so you know one long buzz and two short buzzes means someone's calling you out on Twitter, for example. Any software that uses the iOS or Android notification back-end will feed into the watch app's settings, so you aren't reliant on this or that app specifically including support. While simple, we think it's actually pretty clever, and doesn't look half bad, which is a bonus. Anyone that's intrigued by the Notifier and its semi-smarts will have to wait until Q2 2014 to pick one up, when Martian will start selling them for around 130 bones. In this article: ces, ces2014, hands-on, martian, martiannotifier, martianwatches, mobilepostcross, Notifier, smartwatch, smartwatches, watch
All products recommended by Engadget are selected by our editorial team, independent of our parent company. Some of our stories include affiliate links. If you buy something through one of these links, we may earn an affiliate commission.