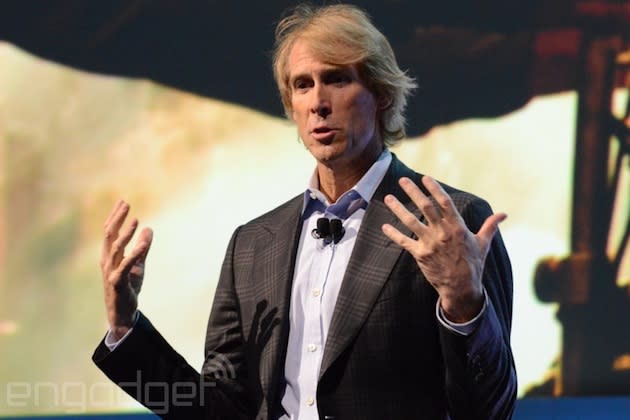 Michael Bay just came onstage during Samsung's big Ultra HD showcase here at CES 2014, but abruptly left the stage without announcing anything. Apparently tripped up by teleprompter issues, the director of the Transformer movies said he'd try to wing it before giving up in frustration. That left EVP Joe Stinziano alone to chuckle about the trickiness of producing live events before moving on to the business of introducing ever larger televisions. The best part? This isn't the first time Bay has pulled one of these -- back in '09 he nuked an LG CTIA press event by pulling out a Samsung cellphone on stage.

Update: Bay has been quick to explain the abrupt exit -- he says he got "so excited" that he jumped his cue, explaining that he will be doing a special curved screen experience centered around Samsung and Transformers 4. Check out a video clip of the entire appearance after the break.

In this article: 4k, ces, ces2014, hdpostcross, michaelbay, samsung, transformers4, ultrahd
All products recommended by Engadget are selected by our editorial team, independent of our parent company. Some of our stories include affiliate links. If you buy something through one of these links, we may earn an affiliate commission.