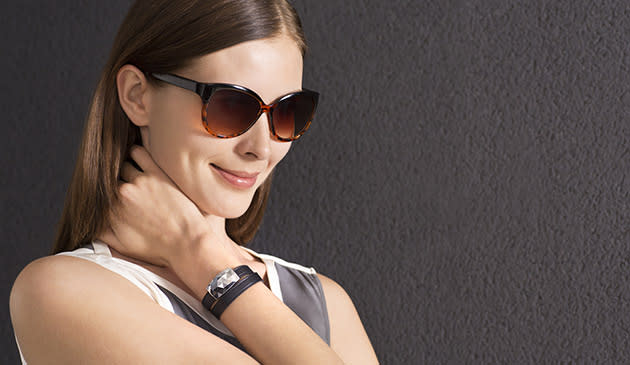 Netatmo's adding a dash of fanciness to this year's parade of wearable announcements at CES. The firm, known for its thermostat and weather monitor, unveiled the June bracelet: a wrap around piece of arm candy with a gem stone-like sensor that measures sun exposure. Since it was designed by Louis Vuitton and Harry Winston collaborator Camille Toupet, it looks a lot chicer than most wearables out there. The downside, however, it that it doesn't have its own display. Instead, it syncs with an iOS app, which not only displays how much sun you're getting, but also tells you what SPF number your sunscreen should have and when to wear shades or a hat. When it starts shipping in the second quarter of the year (or so the firm hopes), it'll come with a $99 price tag and will be available in platinum, gold or gunmetal. That sounds expensive for something that fills an extremely specific niche, but if you usually pay more than that for jewelry, we imagine it might be a worthy investment.

In this article: app, ces2014, health, IOS, june, netatmo, wearable
All products recommended by Engadget are selected by our editorial team, independent of our parent company. Some of our stories include affiliate links. If you buy something through one of these links, we may earn an affiliate commission.