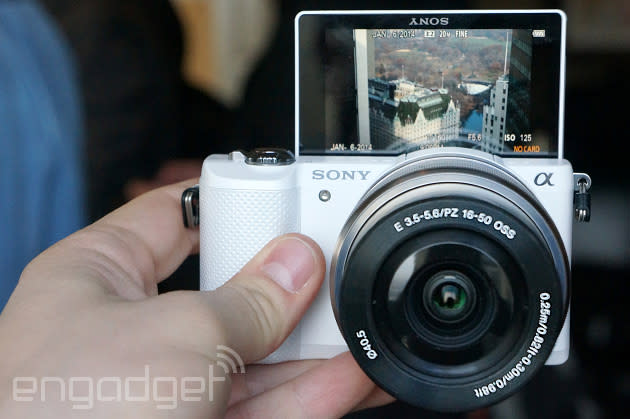 Sony's NEX branding is officially no more. The Alpha 5000 is the company's first entry-level camera to drop the familiar moniker, falling instead under the higher-end Alpha lineup. Everything else about this CES model fits the mold, however. There's a 180-degree tilting LCD that flips forward for self-portraits, built-in WiFi (with NFC) for instantly sharing pictures and videos on the web, Camera Apps for tweaking shots and uploading directly through a wireless hotspot and Sony's latest 16-50mm power-zoom kit lens for smoother zooming during video capture. On the imaging front, there's a 20.1-megapixel sensor, a 16,000 top ISO and 1080p shooting at 60i, 30p and 24p. There's also a built-in flash -- an appropriate feature for Sony's target demographic of beginner photographers stepping up from a less-capable point-and-shoot.

Despite the new name, the Alpha 5000 feels very much like an NEX. There's a more pronounced grip (think NEX-5T, not 3N), and the same tweaked (and improved) multi-page settings interface that we first met with the Alpha 7 and 7R back in October. Like its recent Sony counterparts, the 5000 charges via its micro-USB port, and it sports an HDMI output (this time, with 4K image support), for photographers looking to share their captures on a TV. Of course, with WiFi built in, you can also transfer shots to a smartphone or tablet, back up your media on a connected computer or boot content to a compatible television via DLNA. You can take a closer look at the Alpha 5000 in the gallery below. Expect it in stores this March in black, white and silver for $600, including the 16-50mm power-zoom lens. 25
In this article: alpha, alpha5000, camera, cameras, ces, ces2014, hands-on, mirrorless, MirrorlessCamera, nex, sony
All products recommended by Engadget are selected by our editorial team, independent of our parent company. Some of our stories include affiliate links. If you buy something through one of these links, we may earn an affiliate commission.