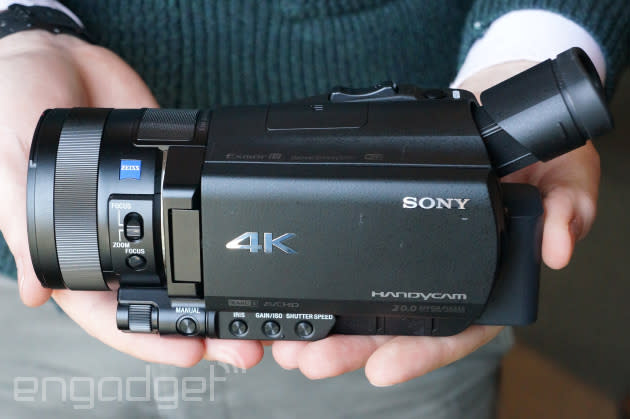 Television manufacturers have been peddling 4K TVs for several years now, but just as we experienced during the early years of HD, limited content deters educated early adopters when it comes time to make a purchase. One solution for marketers, while an arguably weak selling point, is that consumers can capture their own 4K footage to play back for family and friends on a compatible high-res set. And while we're not yet ready to hop in line to make a pricey Ultra HD purchase, Sony's counting on at least a few deep-pocketed videographers to pull the trigger. If you're in the market for an affordable 4K camcorder, you probably won't do much better than Sony's FDR-AX100 Handycam.

The AX100 is a reasonable alternative to Sony's recently announced AX1. This compact CES model is considerably more portable, with a 74 percent reduction in size and a 66 percent drop in weight. There's a 14.2-megapixel 1-inch Exmor R CMOS sensor and a BIONZ X processor, enabling full-resolution 4K shooting at 24p and 30p with XAVC S encoding. There's an optically stabilized Zeiss Vario-Sonnar T* lens with 12x optical zoom and a seven-bladed aperture, which Sony claims should offer some significant bokeh. A new My Voice Canceling feature reduces vocals from behind the camera, serving to minimize capturing the videographer's own voice. There's a 3.5-inch (921k-dot) LCD and an OLED viewfinder for framing; 1/4, 1/16 and 1/64 ND filters; WiFi with smartphone control; and output to a 4K TV via a single HDMI cable. Sony's Handycam AX100 4K camcorder is set to ship in March for $2,000. 11
In this article: 4k, camcorder, camcorders, ces2014, FDR-AX100, hands-on, handycam, sony, ultrahd
All products recommended by Engadget are selected by our editorial team, independent of our parent company. Some of our stories include affiliate links. If you buy something through one of these links, we may earn an affiliate commission.