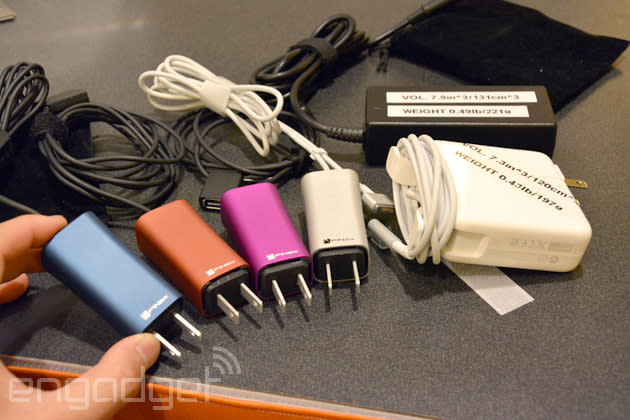 It's 2014, and while some of you have already upgraded to an Intel Haswell laptop, many still have to carry a bulky power adapter for the more demanding machines. Luckily, MIT spin-off FINsix has come up with a breakthrough technology that dramatically reduces both the size and weight of laptop adapters. As you can see above, the startup's new 65W brick is dwarfed by its conventional counterparts; the claim is it's four times smaller and six times lighter. The new adapter also comes with a handy 2.1A USB port alongside the laptop plug, both of which can be used at the same time. Fret not, MacBook users, as FINsix is working on getting Apple's approval to make a MagSafe version as well.

We won't go too deep into the technical details, but in a nutshell, the FINsix adapter is enabled by MIT's VHF (very high frequency) switching technology, which is a thousand times faster than what we use today. As with all legit electronics, this new product will go through the usual safety compliance tests, so there should be nothing to worry about once it hits the shelves. There's no pricing just yet, but watch out for a pre-sale campaign in two months' time ahead of the summer launch. Check out our video after the break, in which the lovely CEO Vanessa Green introduces her company's product at CES. 7
In this article: adapter, ces2014, charger, featured, features, finsix, hands-on, laptop, laptopadapter, power, poweradapter, video
All products recommended by Engadget are selected by our editorial team, independent of our parent company. Some of our stories include affiliate links. If you buy something through one of these links, we may earn an affiliate commission.