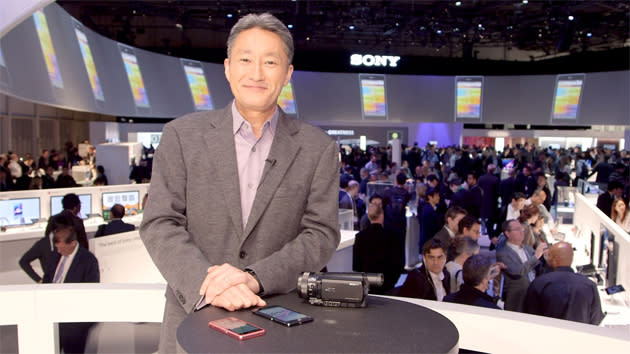 Sony CEO Kazuo Hirai left the theatrics at home during his opening day keynote this morning, instead choosing to focus on the company's vision of the future and his push to unify its disparate divisions. Since he took the reins last year, he's been preaching a unified approach, something he calls "One Sony." That approach manifested itself in a collaborative effort to push 4K content, distribution and devices, and, as of today, a new service called PlayStation Now. That service will allow users to stream PlayStation content to gaming devices, tablets, smartphones and Bravia TVs. We met up with Hirai at Sony's CES booth where he told us to expect more collaboration in the future and, eventually, PlayStation Now on iOS, Android and beyond. For more of Hirai's plans for the future of Sony, check out our interview after the break.

In this article: hdpostcross, interview, mobilepostcross, sony, video
All products recommended by Engadget are selected by our editorial team, independent of our parent company. Some of our stories include affiliate links. If you buy something through one of these links, we may earn an affiliate commission.