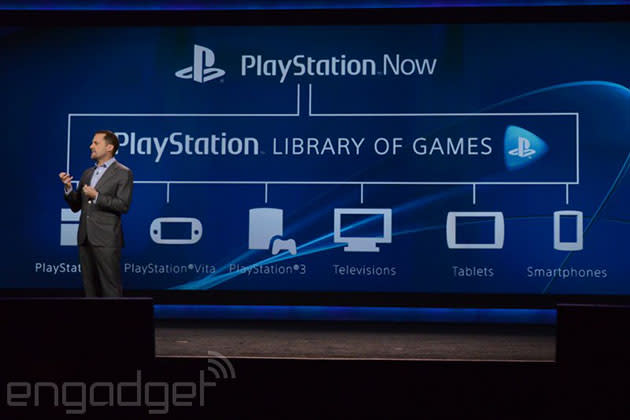 Sony has just announced PlayStation Now, a new service for PS4, Vita, PS3, tablets, smartphones and Bravia TVs based on its acquisition of streaming outfit Gaikai. It represents a new subscription model for PlayStation users, and will kick off with a limited beta on PS3 starting later in January, with a wider US release slated for this summer. Games can be rented by the title or subscription and will support PSN features like multiplayer, online, trophies and messages, even when you're on the road. During his CES 2014 keynote, Sony chief Kaz Hirai said that it'll "enable streaming across your smartphone, Vita, tablet and PS4 wherever, whenever," even at the same time. To enable that, PS Now is tied to a brand-new cloud service, also just announced. There aren't any further details for now, but Sony will be showing off the tech here at CES 2014, so stay tuned for more details.

In this article: ces2014, Gaikai, hdpostcross, PlaystationNow, sony
All products recommended by Engadget are selected by our editorial team, independent of our parent company. Some of our stories include affiliate links. If you buy something through one of these links, we may earn an affiliate commission.