I took a nap on Sleep Number's auto-adjusting smart bed 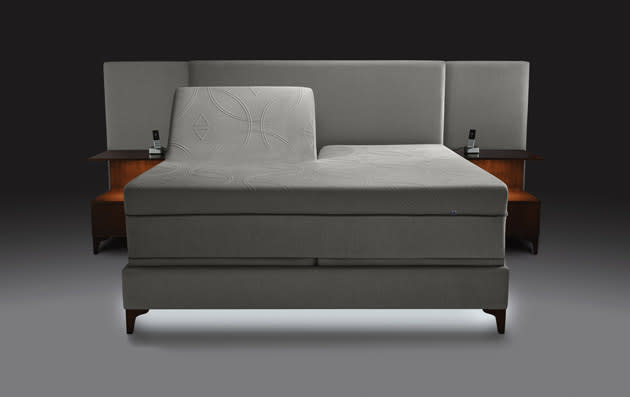 CES 2014: the year the Internet of Things got very, very real. So far at the show we've seen a smart toothbrush and even a smart slow cooker, but is everybody ready for a smart bed? Sleep Number just announced the x12, which packs a variety of sensors to monitor your sleeping habits, movement, heart rate and breathing rate. Basically, then, it potentially eliminates the need for a wearable fitness tracker, assuming you can do without the activity monitoring. In particular, the bed has two sections, each of which are independently adjustable, so that once the bed knows your sleeping patterns, it can suggest ways you might want to change, say, the head incline. Additionally -- and this is perhaps our favorite feature -- a Partner Snore feature allows you raise your partner's headrest to help ease snoring. (Because anything that introduces passive-aggression to domestic relationships wins our vote.)

Wrapping up, the bed offers simple voice commands, and an under-the-bed light acts like a pathlight when you get up to go to the bathroom in the middle of the night. Look for it next month, shipping only in select markets at first, with a nationwide rollout following sometime later. No word on just how many sizes will be offered, though Sleep Number is saying it will definitely offer a queen-sized model for $8,000. Additionally, the built-in SleepIQ technology will eventually come to Sleep Number's other (less smart) beds, with prices then going as low as $999. 5
In this article: bed, beds, ces, ces2014, sleepnumber, smartbed
All products recommended by Engadget are selected by our editorial team, independent of our parent company. Some of our stories include affiliate links. If you buy something through one of these links, we may earn an affiliate commission.