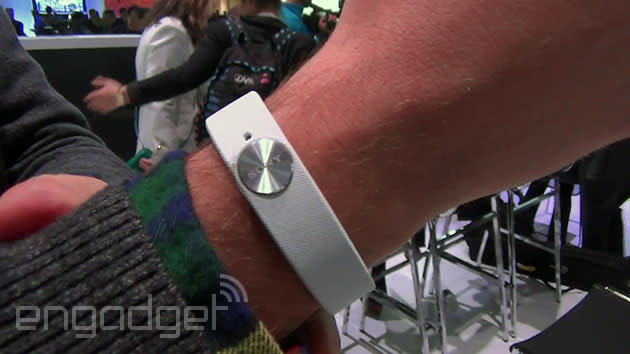 The Core is tiny. Thick as two sticks of gum, but twice as smart, this is Sony's renewed effort for wearables and it really couldn't look more different from the SmartWatch we saw in 2013. It's a different device to begin with: an activity tracker with no screen. Sony's still keeping it all pretty vague, but going on the details of the colorful, oddly appealing app, it's more life logger than health monitor. The idea Sony is chasing is to collect what you do in your life, your movement, your photos, music listened to and your social network goings-on, and collate them into a sort of automated journal -- a new LifeLogger app that will launch alongside the hardware.

You'll need to hook the Core up with your smartphone (through Bluetooth) to see what's happened activity-wise, and we've been told the battery should be good for up to five days on a single charge: it's tiny but there's no blinking lights or vibration to sap power. There's a micro-USB port for recharging, but the whole thing is also waterproof. Sony promises to reveal all the details at MWC next month, but we did get a glimpse at one of the places the Core will reside and, in true CES 2014 style, it's a wristband. We've got a quick video peek and a few more details after the break.

With a textured rubber band (and coming in a stack of colors and patterns) we were reminded of the Misfit Shine: the band is really just a stylized case for the Core. With the sensor stored inside, the SmartBand remained light and comfortable. Because it's flexible and soft, it shouldn't jar when you rest your arms on a desk or laptop, something the FuelBand fails on. There's a machined aluminum Sony decal, while metal studs make sure to keep the band on. In short, details were hazy, but Sony's at least got a plan where it wants the Core to go -- somewhere that could play to the company's strengths across entertainment, imaging and its mobile devices. Here's hoping they can perfect the sales pitch at Barcelona.

In this article: ces, ces2014, core, hands-on, lifelogger, mobilepostcross, smartband, SmartBand SWR10, sony, sonycore, SWR10, video
All products recommended by Engadget are selected by our editorial team, independent of our parent company. Some of our stories include affiliate links. If you buy something through one of these links, we may earn an affiliate commission.