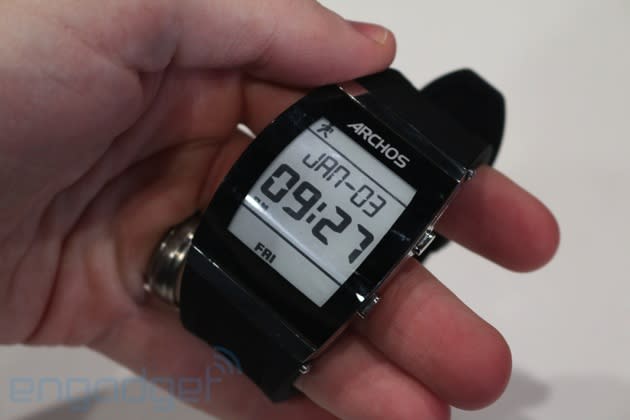 Archos is coming at the burgeoning smartwatch space in a different way. Rather than hedge its bets on a single device offering, it's planning to release a trio of smartwatches for every end of the consumer spectrum. The water-resistant smartwatches in question don't have specific branding attached as of yet -- that will presumably come before launch later this summer -- but they are easily distinguished by screen size and display tech used.

Unlike the half-baked, it-can-sorta-do-everything Galaxy Gear, Archos' smartwatch line is hewing more closely to the Pebble route. These Android- and iOS-compatible devices are designed to supplement your smartphone experience, not replace it. And so, users that buy in will have access to notifications (i.e., SMS, emails, text, Twitter, Facebook, etc.), media playback controls and, of course, a clock. What they won't be able to do is snap photos on a low-resolution camera, talk into their wrists or reply to messages. The cheapest of the bunch is Archos' $50 model, a rugged-looking smartwatch that features a 1.55-inch non-capacitive, black-and-white, memory LCD and is rated for between one and two weeks of battery life. For just $50 more, there's a color capacitive model that steps up the screen size to 1.8 inches (the same size as an iPod nano) and lasts about 36 - 48 hours. Fans of customization and the fashion-conscious will be glad to know the band on this model can be swapped out. And finally, occupying the line's premium perch, at $130, is Archos' e-ink smartwatch, which retains the same screen size as the color model, but with an aluminum-encased curved display.

The smartwatch line isn't slated to launch until sometime this summer, but when it does, don't expect all three to be available at once. Archos plans to offer only its $50 model initially, with its higher-end models to follow in the months after.

In this article: Android, Archos, ces2014, e-ink, eink, hands-on, ios, smartwatch, smartwatches
All products recommended by Engadget are selected by our editorial team, independent of our parent company. Some of our stories include affiliate links. If you buy something through one of these links, we may earn an affiliate commission.