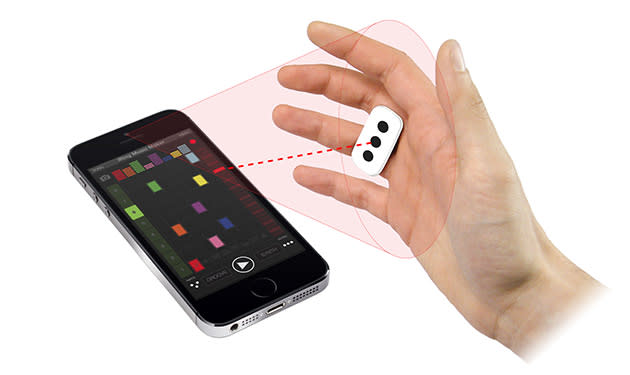 This year's CES has introduced us to a number of devices that cater to specific people. That includes IK Multimedia's iRing accessory, designed for aspiring DJs who'd like to control their iOS music apps with gestures... and a dash of showmanship. So long as a user's wearing the iRing, the iDevice's front camera picks the gesture controls up, and the peripheral's accompanying app translates them to commands music software can understand. According to the company (the same one responsible for a few other music accessories for iOS), the iRing's capable of controlling not only basic music apps, but also advanced ones designed for those who mix their own tunes. It also comes with a couple of its own music-editing apps that one can use to add effects and create non-stop loops. Those who prefer waving their hands in the air over poking at on-screen controls can get the iRing in various music and electronic retailers worldwide for $25. Update: We've just gone hands-on with the iRing at CES and gave it a whirl with iRing Music Maker, one of two apps (the other is FX Controller) that it can take advantage of at launch. The iRing setup consists of two plastic "rings," which have an array of three dots on each side. One end of the plastic peripheral has the specks ordered into a triangle, while the other side has them in a line. An iOS device's camera recognizes the dot formation and controls the mapped function. Push one hand in and out to cycle through music effects or use your other paw to vary intensity. It works as promised, but we wouldn't consider it terribly useful -- unless, of course, you're a DJ only interested showmanship.

In this article: ces2014, hands-on, IkMultimedia, ipad, iphone, IpodTouch, iring, mobilepostcross, MotionControl
All products recommended by Engadget are selected by our editorial team, independent of our parent company. Some of our stories include affiliate links. If you buy something through one of these links, we may earn an affiliate commission.