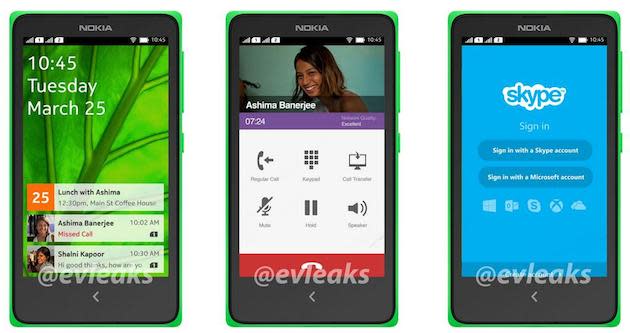 We've heard a number of rumors recently about Nokia's Normandy phone, which will supposedly ship with an Android-based operating system. Shots of the handset, with its lack of a hardware shutter trigger, capacitive buttons and LED flash, appeared back in December, and now mobile tipster @Evleaks has posted what could be the first shots of Nokia's alternative take on Google's open-source platform. Three leaked renders of the device show support for dual SIMs, lockscreen notifications, a dialer screen and what appears to be a custom version of Skype's mobile app.

Nokia's Normandy project is said to be a low-end Asha equivalent that runs a forked version of Android, meaning it won't be associated with Google's apps and services (similar to Amazon's Kindle Fire tablets). As we know, Nokia's mobile business is currently awaiting the all-clear for an acquisition by Microsoft, meaning the project might never see the light of day. The leaked shots suggest Nokia has made significant progress with Normandy, but we'll have to wait and see if the project forms part of its new owner's future plans.

In this article: android, google, mobilepostcross, nokia, normandy, software, ui
All products recommended by Engadget are selected by our editorial team, independent of our parent company. Some of our stories include affiliate links. If you buy something through one of these links, we may earn an affiliate commission.