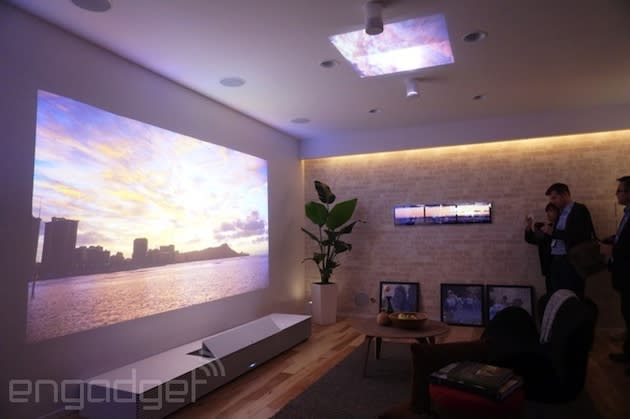 Among the announcements Sony dropped during Kaz Hirai's CES keynote, the Life Space UX project seemed to be most outrageous, pushing an entirely new vision for projectors. We checked out the company's CES demo booth and found out it actually goes even further than that. The prototype 4K Ultra Short Throw Projector shown on stage and in the demo is expected to cost between $30,000 - $40,000 when it launches later this year.

Similar to the pricey Cinema Beam projector released by LG last year, it can sit very close to a wall even in high-brightness settings and beam a large, clearly visible image. The combination of zoom lenses, three separate SXRD microdisplays and a laser diode light source make it powerful and sharp enough to put out a 147-inch 4K image that's visible even with the lights on. Its low sleek design and modular setup (it splits apart to reveal speakers and cabinet space within) is made for flexibility and to be "harmonic" with the room when it's off. Other prototypes in the demo (check out the gallery for a better look) included a projector placed in the lamp over a regular kitchen table for Surface-style interaction, a mirror that turned into a high-res, touchable display and ceiling projectors that shot upwards. 20
In this article: 4kshortthrowprojector, ces, ces2014, hdpostcross, lifespaceux, projector, shortthrow, sony
All products recommended by Engadget are selected by our editorial team, independent of our parent company. Some of our stories include affiliate links. If you buy something through one of these links, we may earn an affiliate commission.