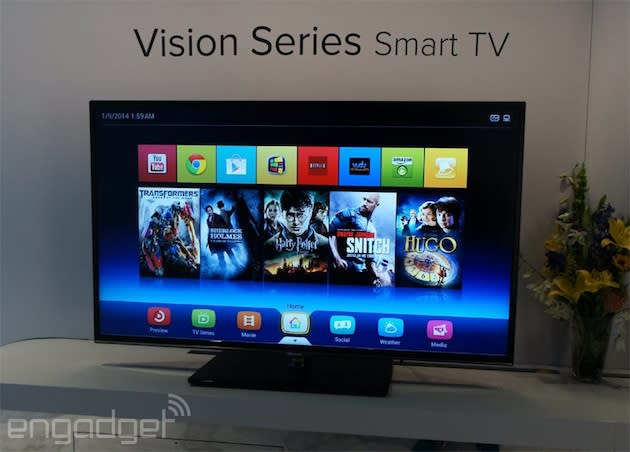 The project formerly known as Google TV has a limited presence on the CES show floor in 2014. While a number of companies are still working up Android-powered boxes and dongles, the largest TV manufacturers we saw on the floor promoting it were Hisense and TCL. Both are showing off skinned versions of Android TV with Google Play, which look different, but offer similar features like gesture and voice control. Hisense was also showing a new version of its Pulse add-on box, which sports some very Chromecast-like video sharing features. Announced in December, Pulse Pro will ship later this year with Android 4.2.2 and brings a new remote with an integrated microphone for voice control. Hisense's Android TVs include its Ultra HD H9 and H8 line

While other manufacturers focus on their homegrown smart TV platforms, it appears Google is doing battle by opening up the services and apps it developed for Google TV to the companies interested in using Android. We'll see if this looser approach helps its reach any, or if Google has any major surprises up its sleeve in 2014, like that Nexus TV box that has been rumored. 5
In this article: 4k, android, ces, ces2014, googletv, hdpostcross, hisense, pulsepro, tcl, tv, ultrahd
All products recommended by Engadget are selected by our editorial team, independent of our parent company. Some of our stories include affiliate links. If you buy something through one of these links, we may earn an affiliate commission.