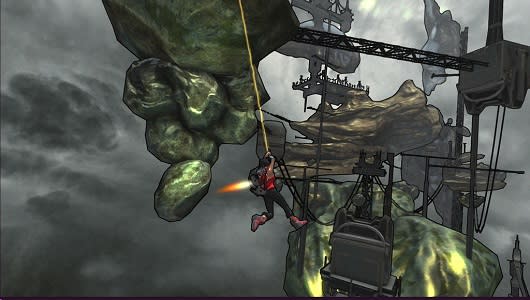 Energy Hook creator Jamie Fristrom wrote yesterday that the game would head to PlayStation consoles "first." It turns out the developer meant it would launch on PS4 and Vita simultaneously with PC, Mac and Linux, the platforms the game was originally funded on Kickstarter for.

Fristrom said as much to Rock Paper Shotgun, in that he "meant first of the consoles - I realize now that was really murky. [Day-one launch] will be concurrent with PC." The game earned $41,535 on Kickstarter in June 2013, and Fristrom's backers already have access to the game's PC beta version, which was updated in December.

Energy Hook will arrive this year, and bring along with it rooftop-to-rooftop swinging action in the same vein as the Activision game Fristrom helped design, Spider-Man 2.
In this article: action, CrowdFunding, energy-hook, happion-laboratories, happion-labs, Indie, jamie-fristrom, kickstarter, linux, mac, pc, playstation, playstation-vita, ps4, spider-man-2, swinging, vita
All products recommended by Engadget are selected by our editorial team, independent of our parent company. Some of our stories include affiliate links. If you buy something through one of these links, we may earn an affiliate commission.