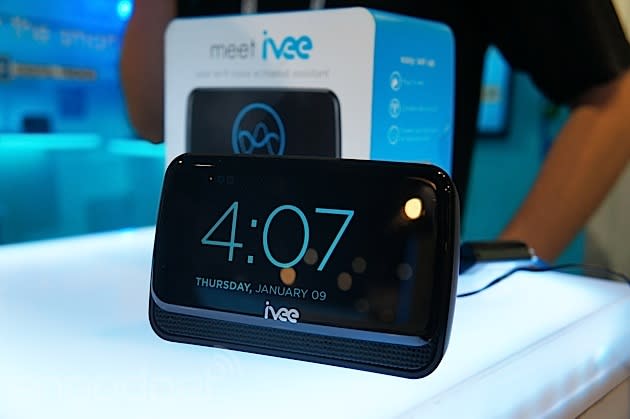 By this point, most of us are accustomed to being able to talk to our laptops and phones to get them to do what we want (some of the time, at least). Now, Ivee Sleek is here to give you the same control over all those WiFi-equipped lightbulbs, thermostats and door locks we've been seeing lately. Sleek looks like a standard alarm clock, but when hooked into your home network it taps AT&T's Watson voice recognition technology to give you voice control over your abode. It's not quite natural language speech system, but Ivee's CEO Jonathon Nostrant informed us that, while direct commands like "make the temperature to 72 degrees" works best, you can also tell Sleek "I'm hot," and it'll turn on the A/C, too. The device is also compatible with Z-Wave devices from Iris and Staples Connect thanks to those platform's WiFi gateways.

We got to see (hear?) Sleek control a plethora of devices in Ivee's booth here at CES, and came away impressed. To get Sleek listening, Ivee pulled a page from Google's playbook -- a simple "Hello, Ivee" gets you started (there's a physical button that accomplishes the same thing). Commands were interpreted correctly without fail and the fact that Sleek lets you know with audio cues when your message is received we found to be a nice touch. However, during our demo, there was a few-second delay between speech, recognition and execution. When we asked about the delay, Nostrant told us that the wireless interference in convention center was the culprit, but he assured us that the Sleek works much more quickly in residential settings. As for the device itself, build quality looks to be pretty good. Black and white versions are available, with soft touch plastic surrounding the thing and uniform seams all around. Should Ivee have piqued your interest you can pick one up today for $199 at your local Staples. 15
In this article: hands-on, homeautomation, ivee, voicecontrol, wifi, zwave
All products recommended by Engadget are selected by our editorial team, independent of our parent company. Some of our stories include affiliate links. If you buy something through one of these links, we may earn an affiliate commission.