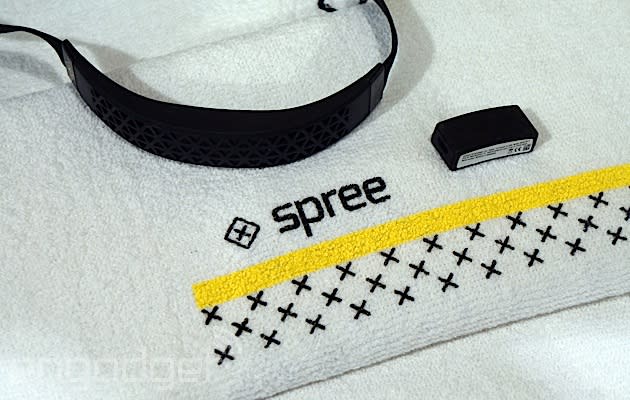 We've seen plenty of fitness watches, armbands and pedometers, but it's a rare moment when we see a pedometer that sits on your forehead. Spree believes that it's the top of your noggin that offers the most accurate physiological data, and that was enough for us to give the hardware a quick look. The device itself is a small, square, rubber brick with an optical sensor covering one of the sides. Naturally, that side has to be pressed up against your skin in order to monitor your heart rate and body temperature, while an accelerometer records your moment. In order to get the Spree into its intended position, there's a rubber headband, which doubles as a sweatband, so, no matter how frantic your nodding, you won't be left wiping your eyes in sticky frustration. Spree was spun out of a company making optical temperature sensors for workers and American football players, who were running the risk of fatally overheating during training sessions. The company then began to get requests from private individuals asking to buy the tech, which is what prompted development of the Spree. One of the biggest consumers so-far, we're told, is women, who prefer a forehead sensor over strapping a heart-rate monitor to their chests, which can be uncomfortable. We're also told that the company is investigating building a pair of heart-rate monitoring earbuds, like the Valencell-powered LG earbuds that launched a few days ago. Connecting over Bluetooth to iOS devices, it'll last eight hours on a single charge, with the company promising that an Android version of its app will arrive in the Spring. Subsequently, development of a Windows Phone version will begin, although there's no schedule on when we can expect to see it in the store. The Spree is priced at $300, and is available in grey, teal, black or pink editions - depending on how exactly you plan on styling your temples that day.

In this article: CES, CES 2014, ces2014, Fitness, Forehead, hands-on, Spree
All products recommended by Engadget are selected by our editorial team, independent of our parent company. Some of our stories include affiliate links. If you buy something through one of these links, we may earn an affiliate commission.