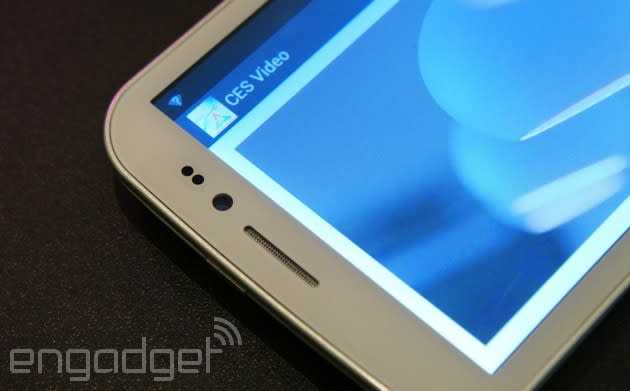 The lights are now dimmed throughout the many halls of CES, and none are more perturbed by darkness than the folks at Oledcomm. Illumination is the company's specialty, after all; or, more specifically, LiFi technology, which facilitates high-speed data transmission via pulsating light sources (though they appear static to the naked eye). We swung by the firm's booth in Vegas to check out the various demos on display, including a two-way, 10 Mbps link tying a Macbook to a router. What interested us most, however, was a concept smartphone that took instructions from the many lamps scattered around the booth. The smartphone -- an unbranded Android handset -- had undergone one key modification: its front-facing camera had been swapped out for a light sensor. A nondescript tablet, too, had undergone the same procedure, and a cheap, gummy bear-shaped LiFi dongle showed a way to retrofit devices via the headphone jack. After loading up an app on the smartphone, holding it within range of lamplight immediately triggered events like displaying a picture, or playing a video. Images and clips were stored on the phone, of course, but nevertheless, the demo showed the potential of one-way LiFi transmissions in mobile devices. Oledcomm, which provides other companies with LiFi infrastructure and software services, imagines implementations from precise indoor geolocation to in-store advertising. For mainstream adoption of the technology, though, the outfit first hopes smartphone manufacturers will add light sensors to their handsets as standard.

In this article: ces, ces2014, concept, hands-on, internet, lifi, light, mobilepostcross, oledcomm, smartphone, smartphoneconcept, video
All products recommended by Engadget are selected by our editorial team, independent of our parent company. Some of our stories include affiliate links. If you buy something through one of these links, we may earn an affiliate commission.