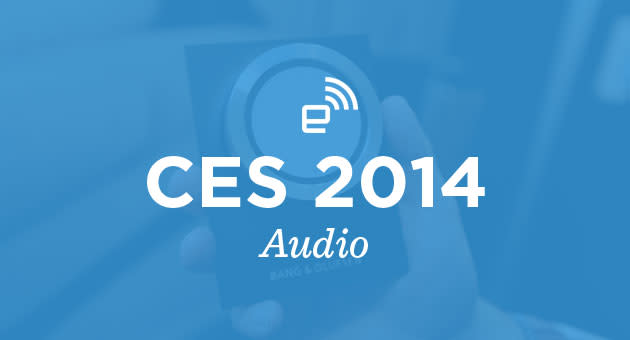 Imagine the footsteps of thousands and thousands of people. Now add in hundreds of booths showing loud promo videos, playing music and giving demos over microphones. That is the literal sound of CES. The theoretical sound of CES will come from some of the products you see below. We feel this selection of products gives you a pretty good feel for the trends we're likely to see in 2014. Enjoy. Usually, this isn't a category that gets too much attention. Digital audio interfaces may come in all shapes and sizes, but they are ultimately fairly utilitarian devices. Korg, however, tried to spice the genre up a little with its AudioGate USB DAC line. What's different about these guys? Well the larger model certainly has an eye-catching design, but it's the companion software that offers high-resolution DSD audio output that we think will make it an appealing prospect. The thing with audio is that it's often a feature of something else, rather than a gadget's dedicated function. Case in point? LG's new SoundPlate (LAB540W). Part soundbar, part Blu-ray player, the SoundPlate has 4.1 audio (and an external subwoofer) that cranks out your movie soundtrack at 320 watts. WiFi and Bluetooth connectivity only serve to add virtual cherries onto the metaphorical cake. Sifting through the many, many new pairs of headphones on show at CES would be nigh on impossible. But, through all the noise, a few pairs do tend to bubble up into our consciousness. 50 Cent's new line of Star Wars-themed and sport-friendly cans is one such example. In particular, the water/sweat-proof wireless sync models that offer cable-free comfortable training look like a winner. DJs, on the other hand, might want to take a look at Sennheiser's new line of DJ headphones. Purpose built with spinners in mind, these things look and feel solid -- oh, and they sound great, too. Audio accessories usually come in two categories: cheap and crazy expensive. B&O's Essence falls into the latter category, but we won't lie: We're curious about it. As far as we can tell, it's a fancy-pants physical audio controller for the audio lover that has everything. And that's OK. Why shouldn't these things exist? Essentially, you can place these around your home and seamlessly control your music as you saunter from room to room. Or just have one in your man/woman cave. You'll need some B&O gear for it to work with, of course, but if you're at all in the market for thing like this, we imagine you already have that covered.

In this article: audio, Bang and Olufsen Essence, BangOlufsen, ces2014, essence, HD6, HD7, HD8, korg, LAB540W, lg, roundup, SmsAudio
All products recommended by Engadget are selected by our editorial team, independent of our parent company. Some of our stories include affiliate links. If you buy something through one of these links, we may earn an affiliate commission.