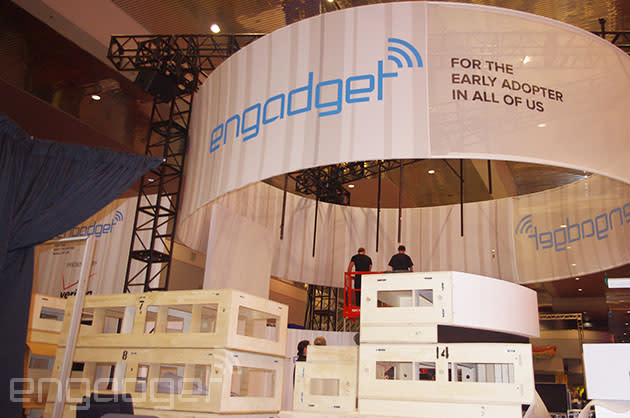 We came. We saw. We got punched in the head. Some of Engadget's New York-based editors took longer to get to Las Vegas than those traveling in from Hong Kong or Tokyo, thanks to winter storms that caused the cancelation of thousands of flights. But we all made it, and by Sunday evening, when we kicked off our coverage at CES Unveiled -- the unofficial start of the event -- our whole team was in place, and some had already been here for days. In addition to publishing hundreds of posts about all of the major products and services announced here, we opened our stage to dozens of amazing speakers, including company founders and CEOs like Bre Pettis of MakerBot, Fitbit's James Park and Stern Pinball's Gary Stern (yes, there was pinball at CES!). All of our interviews from CES are available here, so if you missed something, be sure to check it out now. This was also our first year as the host of the official Best of CES Awards, and that meant spending hours checking out more products than ever, deliberating long into the night as we chose our finalists and winners, and ultimately, having a great time presenting our unique 3D-printed trophies to the winners on our stage. Many of us also had a chance to try out the new Oculus Rift "Crystal Cove" prototype, which won the coveted "Best of the Best" award, along with the award for Best Emerging Technology, and after doing so, there was little doubt about why it deserved to win. As always, the Engadget team had an amazing, exciting, sleepless week, as we wore out our feet traversing over 2 million square feet of exhibit space and our hands writing thousands of words each day. Other people may go to CES to attend parties or to see Christopher Lloyd pull up in a DeLorean and show off his guitar chops. We do it to make sure we can provide you with the best news, features, interviews and information about the world's largest trade show (though we did find time to scope out the DeLorean). If you missed anything, check out our wrap-up posts right here. I'd like to thank the entire Engadget team for once again proving that, even if there's no official award for it, there's only one team that can truly be called the best at covering CES! In this article: ces, ces2014, editorial
All products recommended by Engadget are selected by our editorial team, independent of our parent company. Some of our stories include affiliate links. If you buy something through one of these links, we may earn an affiliate commission.