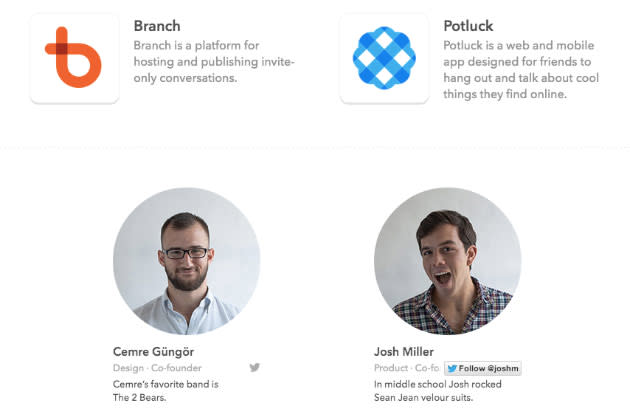 In a move a company spokesperson termed an acqui-hire, today Facebook snapped up the 10 person team behind Branch and Potluck. Josh Miller and Cemre Güngör created the company in 2012 with financial support from Twitter co-founders Ev Williams and Biz Stone, and launched Branch, a social platform, alongside Potluck, a "web and mobile app designed for friends to hang out and talk about cool things they find online." According to The Verge, the deal is valued at $15 million. Both products will now fall within the social giant's umbrella, with the team forming a new Conversations group in New York City. Confirmed in a post from Miller, Branch and Potluck will "live on outside of Facebook," with products resembling both of the existing platforms to come.

In this article: acquisition, acquisitions, branch, facebook, social
All products recommended by Engadget are selected by our editorial team, independent of our parent company. Some of our stories include affiliate links. If you buy something through one of these links, we may earn an affiliate commission.