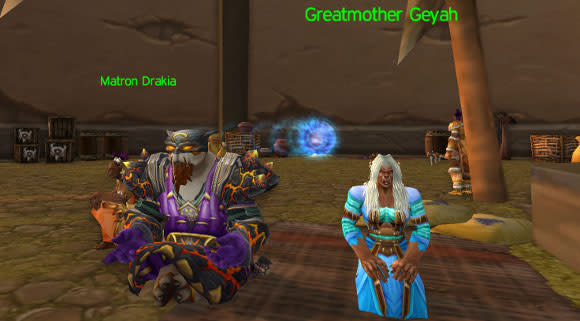 It was a question asked of me the middle of last week by a friend over drinks. We Have been playing video games together, and in particular World of Warcraft, for close to the full decade of it's existence. He has always been more of the DPS type, and never really took to healing as any class, and since I've always been the healer, he was intrigued by what my answer could possibly be.

It seems like a simple question at first. Why do we play any class at all really? But there are a miriad of factors that can be cited as the reason we do. Lore, aesthetics, mechanics, armor. The list can be quite a long one. I sat back and I thought about exactly why I played a restoration shaman for so long, and thought that I would share.

Why I picked up the chain heal in the first place

From the very early days of Warcraft, back when shaman were still Horde only, I was drawn to the class. The first thing about it that I loved was the totem mechanic. The idea of a stick that you threw into the ground that harnessed the power of the elements to buff or deal damage or heal was quite awesome to me. Historically speaking, it was also a fairly accurate representation of real world cultures that I had spent some time studying in college. Even back then, the choices you had were pretty impressive when compared to games at the time. I also, believe it or not, liked the idea of the planning required in the placement of totems. They were static buffs for your raid that you had to be ever so careful in placement to ensure your groups were actually receiving the buff. Totem Dragging, something we endured for a long time, was something you tried to avoid as much as possible due to the mana lost. I liked the tactical nature of it, the planning and the plotting.

The lore of the class also was something that really struck a chord with me. I enjoyed the idea of being a custodian of the elements. You were literally asking for the elements to grant you their blessing, instead of just forcing the powers to your will. It seemed more harmonious, more, well to be perfectly cliche here it was more me. It was water based healing, granted by communing to with the spirits of the water and it just seemed to click to me. It was also pretty interesting to me that shaman became the first warlocks back in the days of Gul'dan and Ner'zhul, and produced some of the games most reviled villains. Shaman are tied to some of Warcraft's most epic events, which was also a defining factor in why I chose to pick up a shaman all those years ago.

The toolkit also was something that intrigued me. Looking at one of the most iconic spells of the shaman class, and for a long time the defining spell of our class, Chain Heal was a truly unique entity in the opening years of the game. It was always a smart heal, seeking out the target with the largets hit points deficit within it's jump range. Despite the diminishing returns on the jumps beyond the first, this fact made it incredibly powerful. Also it had some unique interactions at the time, which included the ability to bounce it off of a totem to extend the range of the spell as well bouncing it off of pets. You could effectively heal around corners and further than any other healer could. It was a very shaman trick, and one I used to use a lot.

The last reason beyond lore, beyond aesthetics and mechanics, was the versatility of the class. We had one of the strongest group healing spells but still had the ability to dish out some decent single target healing. We had the ability to be the ultimate utility healers, and that really appealed to me. I liked the aspect of being a swing healer, able to take on any job at a moments notice. All those things together, drew me into the class from the very beginning.

Why do I still play a resto shaman?

This one is something I get asked often, especially when Mists was released. Why still play a shaman? Why not switch to a monk or another healing class? Well, my first answer is usually along the lines of "I started this game as a shaman, I'll end this game as a shaman." and I do truly mean that. Until the servers go dark, I'll keep playing my shaman. Not just because over the years it's become entwined with my identity, but rather because I still log in and have fun healing on my shaman. It doesn't get old, it doesn't feel like a chore to me. I'm also very happy with how things have changed over the years, and the addition of spells and abilities like Healing Rain and Healing Tide Totem. While I will always lament the loss of Sentry Totem, most of the changes we've received over the years have been better for us in the long run.

It's also still feels heroic to me after all this time. Even our Mastery: Deep Healing is geared towards that feeling by healing those desperate targets for so much more. Our cooldowns like Ascendance and Spirit Link Totem, have an epic feel to them. There's nothing quite like turning into an avatar of elemental fury or binding the spirits of all your team together to weather the storm of damage. I mean, this is the stuff that some of the most epic of fantasy stories is made of! I'm also hopeful for the future with Warlords on the horizon, there is still so much more for us to do and so much more we can have added. This last reason why I still play may sound a bit odd to some, but others will get it. Restoration shaman just feels like home. While I will always have alts and play other classes at times, I will always look for that healing rain button or chain heal, regardless of what class I'm on. It feels like where I belong.

So now, I pose the question to you readers. Why do you play your restoration shaman? What made you pick up resto in the first place? Why do you still play today?