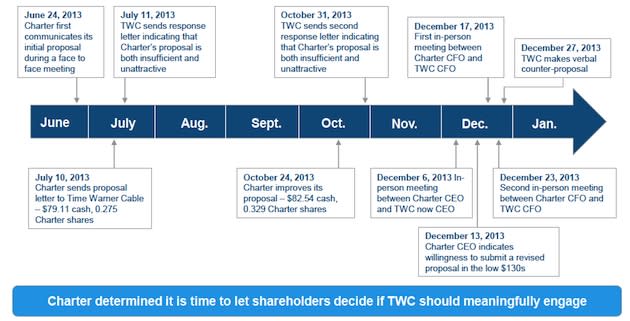 After months of trying to negotiate a deal behind the scenes, Charter Communications is publishing details of its offer to buy Time Warner Cable (which split from Time Warner years ago). Despite a bid that including debt is enough to nab 20 or so Nests, TWC's board responded to the offer by calling it "grossly inadequate." Charter CEO Tom Rutledge is telling anyone who will listen that he can run the company better than its current leadership, and is encouraging shareholders to join him in this viewpoint by making this offer (apparently Charter's third in the last year) public. For customers the upside isn't so clear, as according to J.D. Power Charter is next-to-last in customer satisfaction, staying ahead of only Time Warner Cable -- ouch.

Bloomberg mentions that a reason this deal may happen is because billionaire John Malone is backing Charter, and he believes that by joining the companies he can negotiate better deals with the Hollywood studios that provide their content. Another possibility mentioned by Gigaom, is that control over a larger swath of area and customers could help push bandwidth caps and tiered internet pricing. Others like Comcast have also been rumored to be interested in a deal for at least part of Time Warner Cable, but the Charter/TWC combination would make for the country's third-largest provider behind Comcast and DirecTV.

This afternoon Charter put on a conference call (slides are available here for EBITDA fans to drool over) to explain its side of the argument, and Time Warner replied it "would not let Charter steal this company." The biggest takeaway here is that these same economics affect others in the industry, so there could be more consolidation of cable/internet giants to come.

In this article: bid, charter, comcast, consolidation, hdpostcross, pay-tv, timewarnercable
All products recommended by Engadget are selected by our editorial team, independent of our parent company. Some of our stories include affiliate links. If you buy something through one of these links, we may earn an affiliate commission.