Researchers develop 3D printed objects that can track their own use 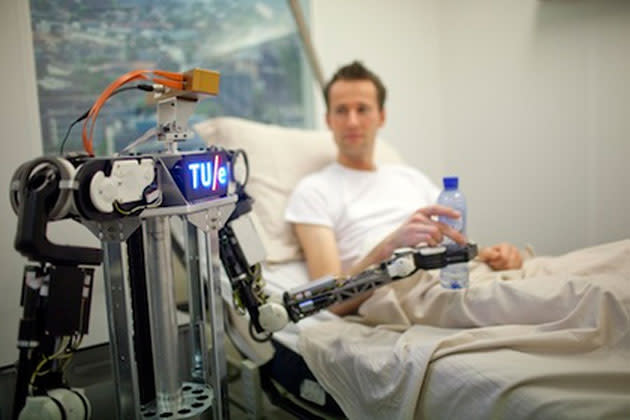 RoboEarth isn't as sinister as it sounds. It's not a special interest group advocating for a new world order with robots at its core -- not yet, anyway. The project, which is backed by the European Union and brings together researchers from universities in Germany, the Netherlands and Spain, is actually more benign than that; it's being described as a "world wide web for robots." We know what you're thinking: What does that even mean? And what would a robot-curated Tumblr look like? The implications are ridiculous, but the reality is not. Simply put, RoboEarth is a four-years-in-the-making, cloud-based hive mind for robotics that aims to store and share knowledge among (you guessed it) robots. The end goal being that single-tasked robots will become a thing of the past. And now, its many collaborators are ready to show off what RoboEarth can realistically do this week.

This initial RoboEarth demo, set to take place on January 16th at Eindhoven University in the Netherlands, will highlight the system's ability to offload real-time computational tasks in the cloud and then disseminate that knowledge to four networked robots working in a mock hospital. According to the BBC, these robots will be tasked with serving drinks to patients, assisting in navigation by uploading maps to the cloud and even helping to open pill boxes. The benefit of all of this shared data being that no one robot is limited to a specific task -- any robot can become multi-purpose.

But there's another upside to this cloud processing that could impact the reality of assistive technology in the home and that's the potential for cheaper-to-produce and longer-lasting commercial robots. With much of the data computation being offloaded to the cloud, manufacturers won't need to create robots with top-shelf components, making them more affordable long-term investments for consumers. Which, in turn, means you'll be able to hold onto Rosie just long enough to consider her a member of the family.

In this article: AssistiveTechnology, EindhovenUniversityOfTechnology, EuropeanUnion, roboearth, robot hive mind, robothivemind, WorldWideWebForRobots
All products recommended by Engadget are selected by our editorial team, independent of our parent company. Some of our stories include affiliate links. If you buy something through one of these links, we may earn an affiliate commission.