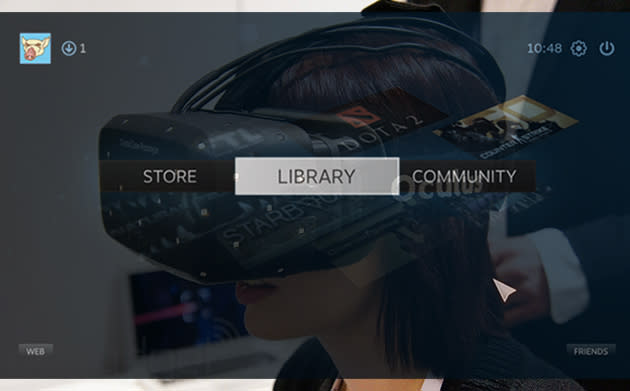 If Oculus VR's new "Crystal Cove" prototype is anything to go by (it's seriously guano, if you hadn't heard already), then gamers are really going to appreciate the virtual reality revival. It's no secret Valve, too, is cooking up its own VR headset, and the company recently added a new search filter to its Steam client to highlight games supporting such hardware. Today, the headset-friendly Steam overlay that's been in the works, now called "SteamVR," is available in the platform's beta client, and those who've got it working are seeing what's essentially a floating and curved version of Steam's Big Picture Mode. The launch of this experimental feature lands immediately before the Steam developer conference, where we fully expect to see Valve's own VR hardware finally become a... well, you get it.

In this article: bigpicturemode, hdpostcross, oculusrift, steam, steamvr, valve, virtualreality, vr
All products recommended by Engadget are selected by our editorial team, independent of our parent company. Some of our stories include affiliate links. If you buy something through one of these links, we may earn an affiliate commission.