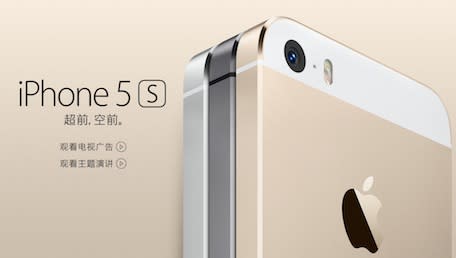 With the iPhone finally set to go on sale at China Mobile this Friday, Tim Cook has been been out front and center hyping up Apple's new business partnership. Indeed, the fact that Cook's level of involvement far supersedes what might otherwise be just a few lines in a press release for other carrier deals underscores the strategic significance of China Mobile for Apple.

Not only did Tim Cook speak to CNBC for a rare videotaped interview yesterday -- where he called the impending launch a "watershed day" -- he also spoke at length with the Wall Street Journal where he partook in a typically insightful Q&A.

Employing an oft-repeated line, Cook explained that while China Mobile represents a great opportunity, Apple always has and always will be more focused on delivering the best products, not selling the most products. But make no mistake about it, you can be sure that Apple in this case is dead set on selling what it considers to be the best smartphone on the planet to as many people as possible. "Most" may not be Apple's driving force, but it's not completely off of Apple's radar either.

And for a company as secretive as Apple is, Cook surprisingly tipped his hand a little bit when discussing iPhone sales in China during the most recent quarter.

Last quarter, we haven't announced numbers, but I can tell you that last quarter we sold more iPhones in Greater China than at any time in our past. And so it was a record quarter, helped by launching China very first in the queue.

Touching on the importance of the China Mobile deal -- aside from the fact that China Mobile has more subscribers than the U.S. has people -- Cook said that the deal now allows Apple to reach areas where it doesn't yet have much of a presence.

China Mobile already has a reach to many cities that Apple does not have a reach to. So yes, you will see over time Apple going to more and more cities and this is something that China Mobile's skill and know-how and distribution network will be an enormous assist to us.

Overall, the China Mobile deal is a really important feather in Apple's cap. With over 763 million subscribers, Apple has expanded its potential customer base by a significant margin. Indeed, one of every 10 people on the planet, statistically speaking, is a China Mobile subscriber.

There's a whole lot more from Cook, including his take on what negotiations with China Mobile were like, over here.

In this article: ChinaMobile, iphone
All products recommended by Engadget are selected by our editorial team, independent of our parent company. Some of our stories include affiliate links. If you buy something through one of these links, we may earn an affiliate commission.
Share
Tweet
Share