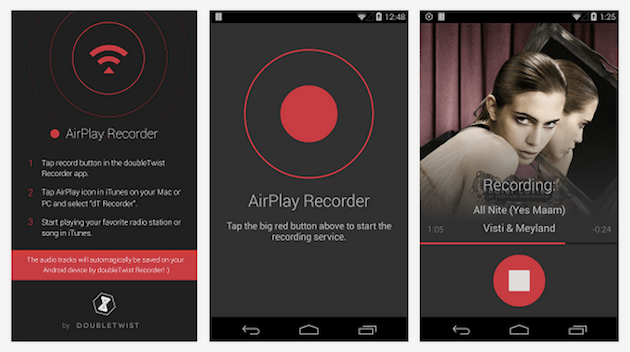 Those clever guys and gals at DoubleTwist have been freeing music from iTunes' grasp for years, so we suppose it was only a matter of time before they figured out how to do the same with songs played on iTunes Radio. The app's called, quite appropriately, iTunes Radio Recorder, and it circumvents Apple's DRM by turns your Android phone into an AirPlay device -- not literally, mind you, the app on your phone simply populates as an optional AirPlay streaming device in iTunes on your computer.

Once the app is selected for AirPlay streaming, music is played and recorded in real-time, so a five minute file will take five minutes to record. Not quite as quick as a download, but it is an elegant way to circumvent Apple's digital audio shackles. As for piracy or legal concerns? DoubleTwist has none. According to company Co-founder and President Monique Farantzos: "Recording has been around for decades, from audio cassettes (remember mix tapes?) to TuneIn radio's recording feature. Given that Apple built their iPod empire on letting millions of people rip CDs based on fair use, we don't see how they could object to this app." So, there you have it. Go forth, friends. Listen. Record. Enjoy the fruits of iTunes streaming and DoubleTwist's coding labors... while it lasts.

Update: We mistakenly reported earlier that iTunes Radio streams are protected with DRM, when in fact, they are not.

In this article: airplay, android, app, audio, doubletwist, hdpostcross, itunesradio, itunesradiorecorder, mobilepostcross, music
All products recommended by Engadget are selected by our editorial team, independent of our parent company. Some of our stories include affiliate links. If you buy something through one of these links, we may earn an affiliate commission.