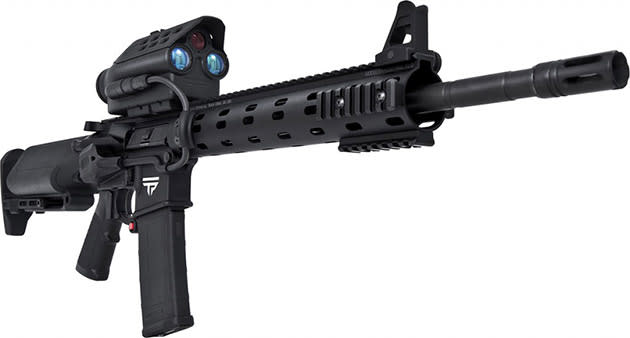 Not all soldiers are crack shots, but the U.S. military is reportedly hoping to make that happen -- with a little help from "smart" rifles, that is. According to a startup called TrackingPoint, the military bought six of its precision-guided firearms that can cost between $10,000 to $27,000 each. These pricey rifles come equipped with a Linux computer in the scope and sensors that automatically determine environmental factors such as the weather and ground inclination. Users merely have to tag a target while peering into the scope, and the built-in computer will show them how to position the firearm before they press the trigger. The company's claim came during the SHOT gun show in Vegas, where TrackingPoint is apparently still hanging around after showing off new semi-automatic guided rifles at CES. The units purchased will be used to test if ordinary soldiers can compete against trained marksmen when equipped with superior weapons. If the tests go off as the company says, its products might share the spotlight with DARPA's laser-equipped sniper scopes in the future.

In this article: darpa, military, rifle, trackingpoint
All products recommended by Engadget are selected by our editorial team, independent of our parent company. Some of our stories include affiliate links. If you buy something through one of these links, we may earn an affiliate commission.